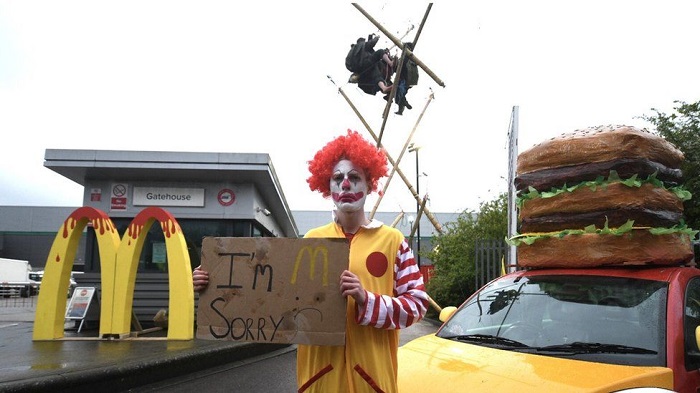 Animal rights protesters say they are blockading four McDonald's distribution centres in the UK to stop deliveries to the fast-food chain's 1,300 UK outlets.

The group is targeting McDonald's "for its role in the climate emergency".

McDonald's UK said it was "assessing the impact" of the protest on supplies.

A spokeswoman said: "Our distribution centres are currently facing disruption. We are assessing the impact on deliveries to our restaurants and to menu items. We apologise to our customers for any disappointment caused."

Animal Rebellion spokesman James Ozden, at a protest in Coventry, accused the meat and dairy industry of "destroying our planet".

Mr Ozden told the BBC the meat and dairy industry was "causing huge amounts of rainforest deforestation, emitting vast quantities of greenhouse gases and killing billions of animals each year".

"The only sustainable and realistic way to feed 10 billion people is with a plant-based food system. Organic, free-range and 'sustainable' animal-based options simply aren't good enough", he said.

Animal Rebellion wants McDonald's to commit to becoming fully plant-based by 2025.
The group tweeted that it intends to remain at the sites for at least 24 hours and aims to cause "significant disruption" to McDonald's as the restaurants restock over the weekend.

A second tweet called on McDonald's to personally engage with the activists at the protest sites, saying: "We're waiting for them to come talk to us, or we'll stop their distribution to all 1,300 restaurants ALL DAY."

West Midlands Police said it was aware of the protest at the depot site in the Canley area of Coventry and there was a police presence there.

The force said it recognised "the right to a peaceful protest", but expressed concern over the "significant disruption to businesses" caused by blocking the sole entrance and exit point to the distribution site.

"We have asked the small group of activists to remain mindful of road users and in particular emergency vehicles and will continue to maintain an open dialogue with them," a spokesman for the force said.

Animal Rebellion describes itself as "a mass movement that uses nonviolent civil disobedience to bring about a transition to a just and sustainable plant-based food system".