Covid-19: Should all children get a vaccine? 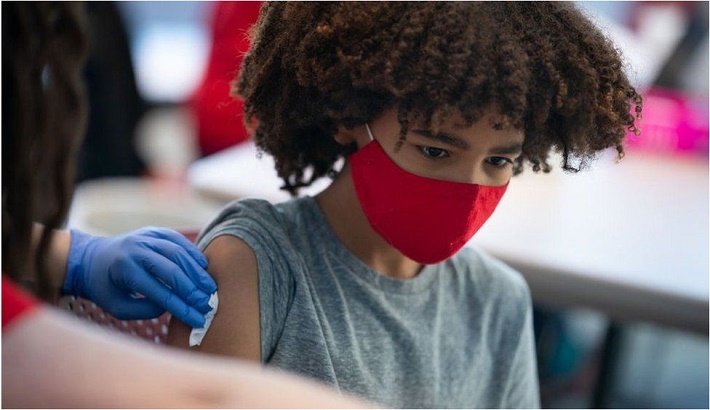 Some countries are cracking on - the US has already immunised around 600,000 children, aged between 12 and 15. It expects to have enough safety data to go even younger next year.

The UK is rattling through the adults - who should all have been offered their first dose by the end of July - but has yet to come to a decision on children.

There is a scientific question - will vaccinating children save lives? - which is complex as the answer may vary from country to country. There is also a moral and ethical dimension if doses destined for children would save more lives if they were given to health workers and vulnerable adults in other countries.

The risk of Covid in children is very low

One argument against vaccinating children is they get relatively little benefit from it.

"Fortunately one of the few good things about this pandemic is children are very rarely seriously affected by this infection," said Prof Adam Finn, who sits on the UK's Joint Committee on Vaccination and Immunisation.

Infections in children are nearly always mild or asymptomatic, which is in sharp contrast to older age groups who have been prioritised by vaccination campaigns.

A study across seven countries, published in the Lancet, estimated that fewer than two out of every million children died with Covid during the pandemic.

Even children with medical conditions that would raise the dangers of a Covid infection in adults are not being vaccinated in the UK at the moment. Only those at "very high risk of exposure and serious outcomes" - which could include older children with severe disabilities in residential care - are recommended to be vaccinated.

The vaccines are incredibly safe, but the risk and the benefit still have to be carefully weighed.

Some countries may benefit from vaccinating children

There is another potential benefit to vaccinating children - it could save other people's lives.

This is an approach that is already used for flu. British children aged from two to around 12 are given the nasal spray, largely to protect their grandparents, each year.

One argument is doing the same with Covid vaccines could help contribute to herd immunity - the point at which the virus struggles to spread because so many people are protected.

The Covid vaccines look very good at disrupting the spread of the virus. Just one dose appears to cut the chance of catching the virus by at least half and even those that do still get it are half as likely to pass it on.

Children do not appear to be major spreaders of coronavirus, but older teenagers may still play a role.

"There's certainly evidence of potential for transmission in secondary school ages, so vaccinating could have an impact on overall transmission," said Dr Adam Kucharski, from the London School of Hygiene and Tropical Medicine.

But there is not a universal answer on whether it is worthwhile.

The UK's vaccination programme is hurtling ahead and there have been large outbreaks that have left a legacy of immunity which could also play a role.

More than a quarter of 16 and 17-year-olds in England have coronavirus antibodies in their blood despite barely any of them being vaccinated.

So the UK and similar countries could find they have enough immunity to stop the virus spreading without vaccinating children.

"It's a very different situation to countries without many outbreaks and who don't get as high coverage in adults, then it's very difficult without vaccinating young groups as well," said Dr Kucharski.

Australia is one country struggling with vaccine hesitancy and, alongside places like New Zealand and Taiwan, contained the virus so well there is barely any immunity from infection.

Is it morally acceptable?

One thing to bear in mind is who doesn't get a vaccine if a child is given one instead.

The World Health Organization says wealthy countries should postpone their plans to immunise children and donate them to the rest of the world. Prof Andrew Pollard, who ran clinical trials of the Oxford-AstraZeneca vaccine, said it was "morally wrong" to prioritise children.

Prof Eleanor Riley, an immunologist at the University of Edinburgh, said: "There is a case for it and if there was unlimited supply of vaccine we could keep going with the over-12s, but there isn't.

"Eventually it's a political decision whether to prioritise our kids over adults dying in their droves elsewhere in the world."