Will Start ‘Tibet Advocacy Group' with Tibetans Living Across Globe to Feed our Cause: New Prez of CTA 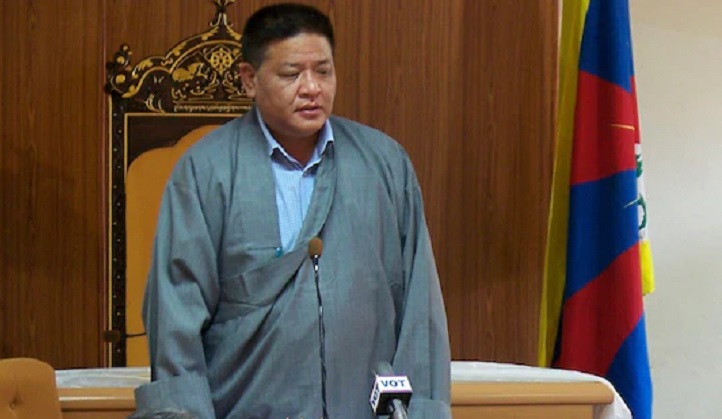 The former Speaker of TPiE, Penpa Tsering is all set to become the next Sikyong (President) of the Central Tibetan Administration (CTA) after the official results of the Presidential and Parliamentary (Chithue) elections were declared by the Election Commission (EC).

Here’s a brief conversation with Penpa Tsering who will be taking charge from Lobsang Sangay.

What will be your priority areas as a Sikyong?

Mr Tsering- The two main responsibilities of the Central Tibetan Administration which some Indians call as Tibetan Government in exile. The first one is to resolve the Sino-Tibet conflict and the second one is to look after the welfare of the Tibetan diaspora.

So our effort would be to reach out to the Chinese government because the reality is that the Tibetan issue can be resolved only by talking with the Chinese. I will try to put forward our consistent position that his Holiness has followed over several decades to find a mutually beneficial solution to the conflict that can benefit not just China but also the Tibetans as this field have a lot of positive replications in the entire geopolitical region.

The welfare of Tibetans here- it is my job to bring back all the Tibetans together for the common interests of the community.

When we look at the CTA, one of the common arguments is what will happen to the common amdo?

Mr.Penpa Tsering- We all Tibetans, speak the same language which we derived from India and we practice the same religion, practice the same ethnic book which we derived from the country. Irrespective of slight difference in historical backgrounds, we are all same. Coming to common amdo, it is very much part of our struggle and yes, we are asking for entire Tibet and no just a one part of it.

We know the Chinese are dealing with minorities like Uyghurs or Tibetans, as a sikyong, how are you going to deal with it?

Mr.Penpa Tsering- Sinification of Tibet is one of the major concerns, that’s why we say we do not have much time. If you look at the area of Tibet it’s about 2.35 million square kilometres, which is about a quarter of the Chinese landmass, but when we look at the population, we are only 6 million, out of the total 1.4 billion Chinese. That’s why we are not against multiculturalism but a single majority community. As a big minority community, eradication of Tibetan national identity, whether it is in terms of language, religion, cultural or Tibetan environment is a huge concern for us. There are many issues but we have to take their challenges as a whole.

Do you see the possibility of the minorities coming together, forming a collective front against the CCP and the PLA?

Mr.Penpa Tsering- Even now the diaspora community of the Uyghur, of the Inner Mongolians, they like to call themselves as Southern Mongolians and Taiwanese and HongKongies. All these people meet from time to time. But for all these groups to come together, there has to be some common ground. Tibetans follow non-violent means of resolving the issue and the official position of the Central Tibetan Administration, approved by the parliament in exile is a middle-way approach. So as long as there is a common approach there is definitely a way forward for all the minority communities to come together.

CCP has not been very amenable in indulging in any sort of dialogue especially with the CTA or Tibetans, So how do you plan to engage with the CCP leadership and the authorities?

Mr.Penpa Tsering- I think, there has to be a common-sense within the Chinese leadership that they just cannot wish these issues away, as it includes a community that is talking about the preservation of its national identity. As the Chinese government think ‘development’ is the solution to everything, but Tibetans are still concerned about their identity, development alone does not fulfill the aspiration of these people. So if China really considers all these minority nationalities as part of it, then they have to look after the welfare of these communities. Only then can there be hope for a solution.

What role will the CTA play when the 14th Dalai Lama will not be amongst us and then the CCP will try and place their own Dalai Lama?

How are you going to reignite the Tibetan cause amongst youths who are no more part of the culture, or who have moved out in abroad?

Mr.Penpa Tsering- I may not exactly agree with what you are saying in terms of young Tibetans detachment towards the cause, but definitely, it’s a challenge for us. I intend to launch a program officially ‘Tibet Advocacy Group’ which would be international in nature. Those are the potentials that we have, that we need to harness and to bring it to full bloom. We will also organise special sessions with youngsters to bring to the front if they are not.

You have very clearly said that you are going to follow the middle path but however, the CCP doesn’t seem to be very keen on such an approach. So how do you propose to take this forward?

Mr.Penpa Tsering- That is why we are talking about common sense. Once common sense prevails on the Chinese leadership that this is the only way forward, then there will be a realization that the Tibetan issue needs to be addressed, which is beneficial for both, China and the Tibetan people. So my efforts would be on multi levels.

One is to find a lasting solution for Tibet. The Chinese government does not appreciate third-party intervention, what they call internationalization of Tibetan issue. So if they are really concerned about that, we are ready to reach out to them directly. But on the other hand, if they are not willing to respond, that doesn’t make sense to us. Our effort will continue till a lasting solution is found.

What is your expectation from the Indian government? Would you want the government to more aggressively recognise the borders as Indo-Tibetan borders?

Mr.Penpa Tsering- This is a legacy of many years of Indian leadership, there have been so many more vocal leaders who wanted to take a stronger position on Tibet, but that was in the past. We have already crossed 70 years into exile and now I think realization is setting into the minds of Indian leaders that India needs to be more proactive.