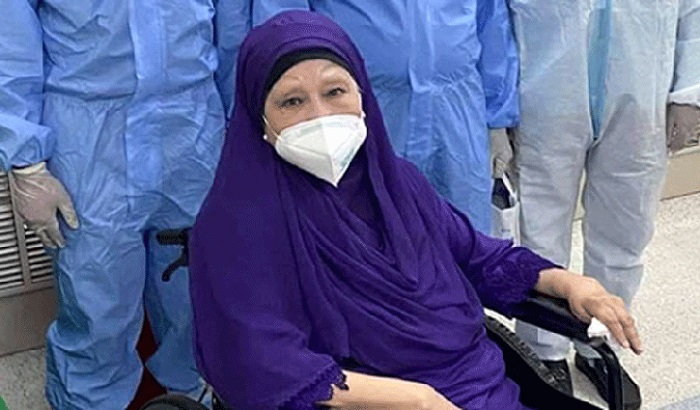 “It’s a matter of little worry that her (Khaleda Zia's) heart and kidneys have been affected by her post-Covid complications. Doctors are worried about this and they’re trying to figure out how to cure that,” he said.

Fakhrul said he visited Khaleda Zia on Thursday at the Coronary Care Unit (CCU) of Evercare Hospital in the city. “I felt good seeing her yesterday (Thursday) as I saw a little smile on her face after a long time.”

Referring to Khaleda’s doctors, he said her oxygen saturation is now quite good with normal body temperature and no breathing difficulty. “But she has been receiving treatment at the hospital in a very bad condition due to the post-Covid complications."

He said doctors told him that the BNP chief needs treatment for her various complications, including that of heart and kidneys, at an advanced medical centre where all modern equipment is available.

“That’s why her family members submitted an application to the government to send her abroad for treatment. It’s unfortunate for us that the government didn’t give that permission,” the BNP leader bemoaned.

He thanked the doctors of the hospital and Khaleda’s personal physicians for providing her treatment with utmost sincerity. “They’re regularly monitoring her condition and trying to provide her better treatment in consultation with the doctors from the USA and London.”

Fakhrul hoped that Khaleda would surely recover fully and work again for the welfare of the country’s people.

The 76-year-old BNP chief, who tested positive for Covid-19 for the second time on April 24, was admitted to Evercare Hospital on April 27 for a thorough health checkup. She was shifted to the CCU of the hospital with shortness of breath on May 3.

Khaleda Zia tested positive for Covid-19 on April 11 as eight people at her residence were infected with the virus. She underwent the second Covid-19 test on April 24 and her report was positive.

She tested negative for Covid-19 on May 8, 27 days after she had been infected with the deadly virus.

The BNP chief’s family submitted an application to the government on May 6 seeking permission to send her abroad for advanced treatment, but it was turned down as a convicted person cannot avail of such a scope.