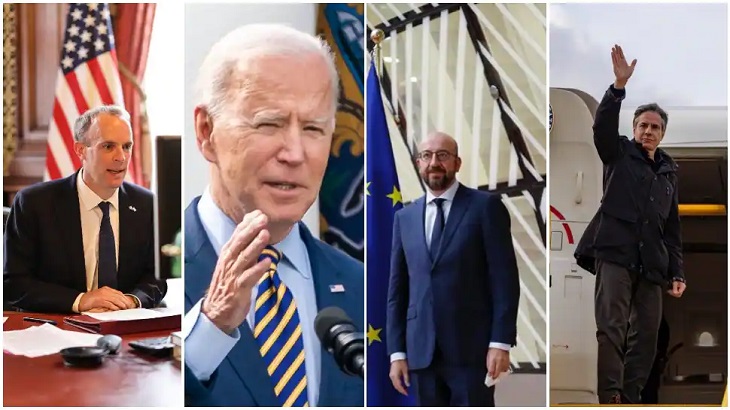 World leaders and top diplomats welcomed an Egyptian-mediated ceasefire between Israel and Hamas that was in place Friday, while urging a long-term political solution to the Middle East conflict.

Here are reactions from around the world:

The EU welcomed the ceasefire and insisted that working toward a "two-state solution" was the only viable option.

"We are appalled and regret the loss of life over these past 11 days," EU foreign policy chief Josep Borrell said in a statement.

"As the EU has consistently reiterated, the situation in the Gaza Strip has long been unsustainable."

Russian foreign ministry spokeswoman Maria Zakharova said while Moscow was satisfied with the truce, more needed to be done.

"This is an important but still insufficient step," she said.

"In order to avoid a resumption of violence, we must double international and regional efforts on relaunching direct political negotiations between Israel and the Palestinians."

Beijing welcomed the truce and said the international community now needed to "extend helping hands" to the region.

It said it would commit $1 million in emergency aid and a further $1 million to UN relief efforts for the Palestinians.

"The international community should promote the resumption of peace talks between Palestine and Israel, and achieve a comprehensive, just and lasting solution to the Palestine issue on the basis of the two-state solution," foreign ministry spokesman Zhao Lijian told reporters.

"I believe we have a genuine opportunity to make progress and I'm committed to working toward it," Biden said at the White House, highlighting Egypt's role in brokering the truce.

"Good that there is now a ceasefire," Foreign Minister Heiko Maas tweeted, a day after he visited Israel and Ramallah for talks.

"Now we have to deal with the causes, rebuild trust and find a solution to the Middle East conflict."

Britain called on all sides to the conflict to ensure the ceasefire is lasting.

"All sides must work to make the ceasefire durable and end the unacceptable cycle of violence and loss of civilian life," UK Foreign Secretary Dominic Raab said on Twitter, adding that Britain supports "efforts to bring about peace".

France welcomed the ceasefire but said the violence underscored the need for a relaunch of the peace process.

"Hezbollah congratulates the heroic Palestinian people and its valiant resistance on the historic victory achieved... against the Zionist enemy," the Shiite group said in a statement.

Kuwait's foreign ministry said "the agreement is a step to help save lives and end the violence for which the Israeli occupation authorities bear responsibility".

"Achieving stability in the region requires concerted international efforts to resume the peace process in the Middle East and to establish an independent Palestinian state with east Jerusalem as its capital," it said in a statement carried by the official Kuwait News Agency.

Pope Francis hailed the ceasefire and urged the entire Catholic Church to pray for peace.

"I thank God for the decision to halt the armed conflicts and acts of violence, and I pray for the pursuit of paths of dialogue and peace," he said.

"May every community pray to the Holy Spirit 'that Israelis and Palestinians may find the path of dialogue and forgiveness, be patient builders of peace and justice, and be open, step by step, to a common hope, to coexistence among brothers and sisters'."