The world's biggest, weirdest music event is back 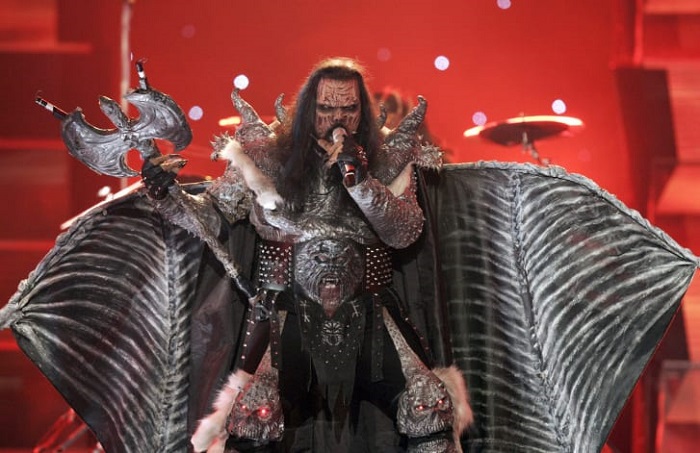 Europe has had an utterly miserable 14 months, thanks in large part to *gestures broadly at everything*. But fear not; the task of cheering up the continent's 750 million inhabitants could not have fallen to a more qualified group.

A trumpet-playing German dancer dressed as a middle finger! A singer accused of advocating Satan-worship! A smattering of central and Eastern European talent show veterans! And, for some reason, Flo Rida! They're all on hand, along with scores of other eccentrics, to cheer up a region itching for a party.
Eurovision, the world's campest and occasionally cringeworthiest competition, is back in action a year after its first-ever cancellation.

The competition may look a little different this year -- Covid protocols mean the pre-tested audience is smaller than usual -- but the leather trousers, confounding lyrical choices and trademark key changes that define music's most bewildering spectacle are all very much present and correct.

So what, exactly, is Eurovision? According to Portugal's contestant Pedro Tatanka, "It's about grandiosity -- it's a big, huge, worldwide musical celebration."

It's a "testament to pop music and humankind," says Denmark's Fyr & Flamme. Or as Norway's TIX tells us, "It's so weird! You can be as extra as you want, and it's not only allowed, it's encouraged." Maybe the easiest way to explain Eurovision is to say that Eurovision is Eurovision, and leave it at that.

This year's event holds special importance; the contest is by far the biggest continent-wide event thrown in western Europe since the pandemic began, and those involved are hoping it will offer both a distraction from lockdown and a blueprint for events this summer and beyond.

Or, to quote a lyric from Benny Cristo of the Czech Republic: "There ain't no apocalypse, as long as you're here on my lips." Well said, Benny, well said.

"I think people have been craving this," Estonia's contestant Uku Suviste tells CNN. "If we can pull it off, and keep Rotterdam from exploding with Covid cases, it will show not just Europe, but the whole world, that we can return to our normal lives."

The contestants represent a smorgasbord of Europop royalty, national stars, novelty acts and fading names hoping to claw back some relevance. But whatever their backstory, and despite this year's restrictions, each one is feeling the thrill.

"I see people in masks, but I see their happy eyes," Natalia Gordienko, the host of Moldova's lottery show and the nation's contestant for 2021, tells CNN.

"We're all excited," Austria's Vincent Bueno adds. "The wait has been way too long -- this is our chance to shine."

'It's our Super Bowl'
For the uninitiated, Eurovision is a gaudy annual spectacle of glitter, razzmatazz and frilly national dress that was initially invented to foster peace after World War II.

Having successfully rid Europe of all its inter-state tensions, it now serves as a medium for geopolitical back-slapping, carefree kitschiness and disarming musical eccentricity. There are also sequins everywhere.

In some countries, like the too-cool-for-school United Kingdom, the approach to Eurovision is simple: The singers sing, the presenters stumble through some over-rehearsed casual banter, the viewing public gets drunk, and everyone goes home with their dignity still partially intact. But across much of the continent, it's a far more serious business.

"I would say it's like a national holiday," six-foot-ten singer Daði Freyr from Eurovision-mad Iceland tells CNN from his band's Rotterdam hotel room. "All the streets are empty ... If you're not watching Eurovision, what are you doing?"

"It's like the Super Bowl," his bandmate Hulda Kristín Kolbrúnardóttir adds.

They're not joking. During the last contest, 98.4% of Iceland's television viewers tuned into the Grand Final. In total, 182 million people across Europe watched the event, the European Broadcasting Union said.
Freyr and Kolbrúnardóttir's group, Daði og Gagnamagnið, went viral with their memorable would-be entry last year, and like most of 2020's frustrated hopefuls, they're back for another shot this time around. But a positive Covid-19 test has meant that, come Saturday, they'll be relying on rehearsal footage; a sudden reminder of the difficulties of throwing a party in a pandemic.