Pelosi Calls for a ‘Diplomatic Boycott’ of the Beijing Olympics 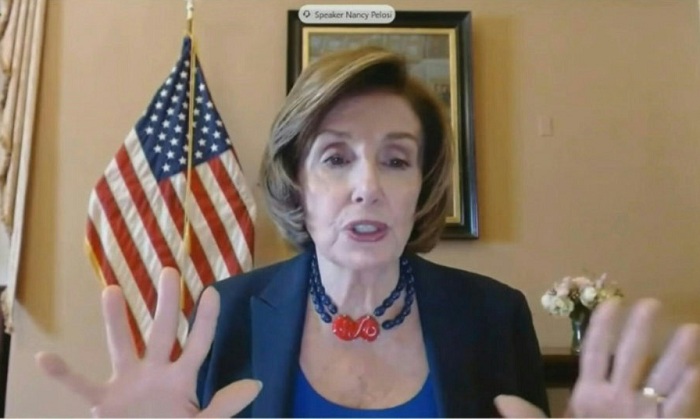 US House Speaker Nancy Pelosi joined calls for a diplomatic boycott of the 2022 Winter Olympics scheduled to take place in Beijing in the latest sign of the growing bipartisan anger with China over human rights.

While some members of Congress have urged that the Olympics be pulled from China entirely, Pelosi and others are advocating a less drastic step that would have the U.S. send athletes but withhold any official delegation from opening or closing ceremonies.

“Honor your athletes at home,” Pelosi said Tuesday at a hearing of Congress’ Tom Lantos Human Rights Commission. “Let’s have a diplomatic boycott if in fact this Olympics takes place.”

Senators Mitt Romney, a Utah Republican, and Tim Kaine, a Virginia Democrat, have proposed legislation in the chamber that would prohibit funding to send any official American delegation to the Olympics as a way to highlight human rights issues in Hong Kong and with China’s treatment of ethnic Uyghurs in its western Xinjiang region.

Romney and Kaine’s proposal was added as an amendment to a package of counter-China legislation that is getting Senate floor consideration this week.

Chinese Foreign Ministry Spokesman Zhao Lijian said in a regular briefing Wednesday in Beijing that a few people “in the U.S., based on ideological and political prejudice, are trying to smear China and sabotage the preparations for the Winter Olympics. We deplore and reject their attempt.”

“Their clown-like performance and staged farce will get no support and are doomed to fail,” he added.

Pelosi supported the idea in her remarks Tuesday saying that U.S. leaders should honor the country’s athletes but not give the Chinese government any diplomatic or public relations benefit of being the Olympic Games host.

“Let’s not honor the Chinese government by having heads of state go to China to show their support for their athletes,” Pelosi said. “For heads of state to go to China in light of a genocide that is ongoing while you’re sitting there in your seats, really begs the question, ‘What moral authority do you have to speak about human rights anyplace in the world if you’re willing to pay your respects to the Chinese government as they commit genocide.”

Pelosi’s statement may help head off moves in Congress to force the U.S. to boycott the games entirely by not sending athletes to Beijing to compete, a politically-fraught decision that was last carried out by then-President Jimmy Carter ahead of the Summer Olympics in Moscow in 1980.

China rejects criticism of its policies in Xinjiang as interference in domestic affairs. Beijing says it is fighting terrorism while providing economic opportunities to adults and education to children in the western region.