Justice elusive for many at FIA cybercrime wing 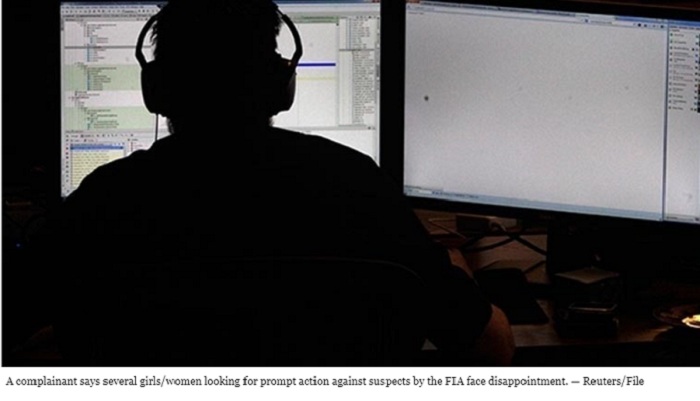 The woman sits glued to her car seat desperately trying to negotiate with her thoughts on whether entering the Federal Investigation Agency (FIA) office will mitigate her sufferings at the hands of her ex-husband who has hacked her email account and is threatening to use social media platforms to blackmail her. Sharmeen (name changed to protect her identity) musters courage and steps in the FIA cybercrime office in Lahore.

“How can I help you?” asked an FIA official. Trying not to show her nervousness, Sharmeen took a deep breath and asked him if he could help her in warning her ex-husband who had hacked her email and was threatening to use information to stigmatise her through the social media. According to her, all through the conversation the official did not show much interest in her complaint and even didn’t bother to ask where the suspect lived or his name which could be put on record for preliminary investigation. Towards the end of the conversation the official advised her to “wait till her ex-husband makes his next move”. Shocked by the suggestion, Sharmeen tried to control her tears and anger and asked him: “What do you mean ‘wait for his next move’? Do you understand how vulnerable I am? He’s a lunatic who thinks he can overpower me by use of physical force.” On this, the official said it was not possible for him to start an investigation without “unassailable proof as the threatening email and WhatsApp messages are not enough to initiate a full scale investigation.”

Sharmeem implored: “Can’t you at least forewarn him verbally?” The official smiled and said, “Madam, if we start giving verbal warnings on harassment, other cases of serious nature will remain unresolved.” That marked the end of conversation clearly indicating the case was a non-issue, says the woman.

Sharmeem recalled her experience to Dawn which she had some four months ago. She has lost trust in the system and is still feeling vulnerable in the face of her ex-husband’s threats.

Similarly, Amina had submitted an application to the FIA cybercrime Lahore some 20 months ago seeking action against those who made a fake ID in her name on the Facebook and uploaded her pictures. Her fake Facebook account also carried a purported bank account of her asking people to deposit amount with it. Some obscene conversation was also made through this account with some of the contacts in the friend-list. “On my complaint an FIA official told me that this was not a serious nature of offence. There have been scores of others who are waiting to get their grievances redressed in much serious nature of the offence. However, the agency received my complaint but no action was taken for months. I would contact the officials concerned but I was told that action was being taken. Finally after a period of seven or eight months I was told that my complaint had been disposed of as it received no help from Facebook.

“On my protest, the FIA again took up the matter... and till today it is pending and the fake account is still operative in my name,” says Amina who is married with one daughter. “I am a working woman. There are many challenges a working woman has to face in the field and this ‘’social media trauma’ happens to be the most difficult to handle. It is very difficult to convince those family members (who come to know about the fake Facebook ID of mine) that it is fake one. I am lucky that my husband trusts me otherwise I would not have continued my job,” she says.

Amina says she isn’t alone as there are several girls/women looking for prompt action against suspects by the FIA but they face disappointment at the end of the day.

The FIA has its reasons for not coming up to the expectations of what it says ‘some complainants’. In cybercrime wings, complaints pour in in thousands every month. Most of them are related to financial fraud. The others are about (accounts) hacking, blasphemy and harassment, says an FIA official in Islamabad in a talk with Dawn.

In harassment, there are more complaints related to uploading of objectionable pictures and videos mostly by ex-husband, ex-fiancé or boy friend to blackmail complainants, he says. Regarding processing period of a complaint, the official says it depends on the ‘nature of the case’. For example, if a suspect makes an account on any social media platform and uploads objectionable material and then closes it and reopens another one it needs more time to detect evidence.

“Some complainants want us to straightaway summon the suspects and warn them of strict legal action. We lay a strong hand on suspects after getting equipped with evidence against them,” he says. The FIA has appointed a woman ‘stress counselor’ at all major cybercrime stations who remains in touch with victims in serious nature of cases for their counseling.

“A large number of complaints in harassment matters are those in which evidence is elusive. It is always difficult to dig out evidence without cooperation of complainants,” another FIA official says. For example, he says a complainant submits evidence of some ‘screenshots’ against a suspect and expects the FIA to lay hand on him based on that.

“In some cases complainants are neither interested in placing their cell phones in FIA’s custody nor producing any witness to the offence. Every complainant wants registration of FIR right away. In complaints like objectionable videos and pictures (of complainant) produced by them (complainants) the FIR is registered at the first instance and the FIA goes after the suspect(s).”

In several cases, the hurdles in evidence collection the FIA faces are non-cooperation of social media networks like Facebook, WhatsApp, Google, Gmail, etc, he says. “There has been no treaty of the government with these companies thereby they don’t feel compelled to share data with the FIA on its request. In matters of a life threat to a complainant or ransom cases, these companies somehow swiftly respond to its requests.”

Besides, the agency is not equipped with the latest software required to detect the digital evidence, he says. In addition to this, the FIA cybercrime wings are not equipped to cater to the rising number of complaints. “Only in Lahore there are 14 investigators to handle a monthly over 3,000 complaints. Then there is a backlog of previous hundreds of complaints. With this number of IOs, to expect the cyber wings to act like a ‘superman’ is not possible... the delay in processing most complaints is obvious. It takes a considerable time on every complaint to be processed -- forensic of the submitted material and correspondent with foreign Apps like Facebook and Whatsapp. In most cases these companies take months to respond to FIA’s queries,” the official says.

Over the period of last few years, the number of complaints had shot up hundreds of times but the government did not pay attention to improve the capacity of the cyber wings especially the training of IOs in the countries which have developed systems in cybercrimes. The government should build the cybercrime on the pattern of the the US’ FBI, suggests the official.

“Besides, the government needs to launch a fresh verification of biometric SIMs as cybercrime is being committed through them with impunity,” the official says and suggests the Pakistan Telecommunication Authority (PTA) should implement ‘more effective procedure’ for the cellular companies for issuance of SIMs to rule out fraud. Currently there are cyber wings in 14 districts in the country which are not enough to cater to the needs of the rising number of complainants.

In the wake the Covid-19 pandemic measures, the FIA cybercrime has asked complainants to prefer filing applications online (www.nr3c.gov.pk) at National Response Centre for Cyber Crime.