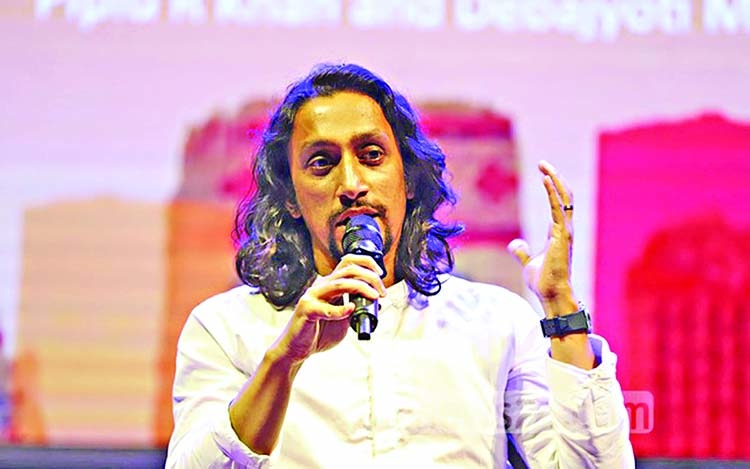 Radwan Mujib Siddiq, the grandson of Father of the Nation Bangabandhu Sheikh Mujibur Rahman and trustee of Centre for Research & Information (CRI), has turned 41 as his birthday falls on May 21.

Radwan, the eldest among three children of Bangabandhu’s younger daughter Sheikh Rehana and academician Shafiq Ahmed Siddique, was born on May 21, 1980.

His sister Tulip Siddiq is a British MP representing London’s Hampstead and Kilburn.

Their father Shafiq had worked at several universities in Bangladesh and abroad.

Radwan is credited with initiating creative and analytic projects – from architecting Mujib graphic novel to co-producing the docufiction Hasina: A Daughter’s Tale to bringing forth Joy Bangla Concert to editing the country’s policy-based magazine WhiteBoard.

The trend he set in motion of presenting history in the form of stories, films, and concerts revived the interest of the young generation in the country’s history.

Mujib Graphic Novel, based on the unfinished memoir of Bangabandhu, is the first of its kind in the country, presenting history to the kids as comics.

He often appears in interactive sessions with youths.

A politics and history graduate from London School of Economics, he is the editor-in-chief of WhiteBoard, a quarterly covering the gamut of policy issues, the first installment of which presented the policies adopted by Bangabandhu in the post-independence Bangladesh, a chapter less-explored and broadly misinterpreted.

In the year 2013, he envisioned a docudrama on her aunt, the current prime minister, Sheikh Hasina, narrating her ordeals beginning with the assassination of her father, also the father of the nation, and nearly the entire family.

Working closely with the director Piplu Khan for five years, scouring through all the traces at home and abroad that might shed some light on the history they were to recreate through a visual, he saw the project coming to life in 2018, garnering local and global acclamation.

“While most historical docudramas in our country are ‘officious’ in tone, Hasina: A Daughter’s Tale stands out in its narrative. The film focuses on storytelling, bringing in engaging stories that would otherwise remain unheard of. The director’s camera even made its way to her kitchen and library too,” he said in an occasion.

“It took five years of effort to get the visual narrative on screen. Down the memory lane, down the trail left by the Father of the Nation, and anywhere a story was waiting to be heard, the crew has pulled out all the stops to bring it on screen, and it is safe to say that the effort was fruitful,” he added.

The setting of the film’s beginning was in Belgium when a land phone rang ominously and transmitted the news that her father and the entire family, except her and her sister, were gunned down in their residence of Bangladesh on August 15, 1975.

That real-life story, portrayed in the film, foreshadowed the trying time setting in on her life and she had to wait six long years to force her entry back to the country.

The killers of her father, the prime minister of the country till his assassination, was endowed with indemnity, and talking about his ideology was banned on the land.

Recalling that period, he said, “It was in 1986 when we came to Dhaka and I was admitted to a kindergarten school in Banani. But I had to change that school. I was annoyed and asked my mother why do I have to change? Then she replied the killers' sons are here. Then I asked how do the murderers remain at large? Then I was told about the indemnity ordinance."

“Our family never hides history from us. So we were briefed about the brutality," he added, recalling that the children of his age did not know anything about Bangabandhu that time.