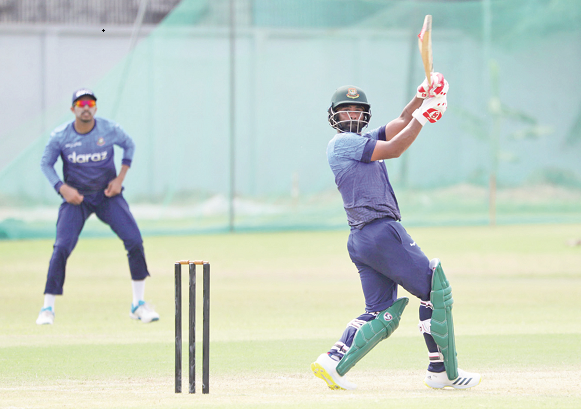 Bangladesh batsmen had a decent outing in the lone intra-squad practice match with most of their regular cricketers scoring handy knocks at the BKSP on Thursday ahead of their three-match one-day international series against Sri Lanka.

Tamim Iqbal (80 off 58), Mushfiqur Rahim (64 off 55 retd out), Soumya Sarkar (60 off 70 not out), Mahmudullah (62 off 54 retd out) and Afif Hossain (64 off 54 retd out) - all scored fifties in the practice match which should have increased their confidence before taking on the visitors in the first game on Sunday at the Sher-e-Bangla National Stadium.

However, things that would worry Bangladesh team management were the performances of Indian Premier League returnees – Shakib Al Hasan and Mustafizur Rahman, who looked out of sort during the practice match.

Shakib, who played for Mahmudullah-led BCB Green, could manage to score 28 runs off 20 balls before he was bowled by off-spinner Mahedi Hasan, who was the most successful bowler on the day, finishing with 2-40 in his nine overs.

The 34-year old also failed to shine with the ball as he managed to finish with 1-45 in his six overs.

Mustafizur, on the other hand, finished with 0-48 in his seven overs while representing Tamim-led BCB Red.

However, BCB Red managed to win the 45-over per side contest convincingly by five wickets by reaching 288-5 in 41 overs. Earlier, BCB Green scored 284-3 in their stipulated overs.

“I think it was a good practice match for the batsmen. We have an international game after two days and it will give us confidence ahead of the match,” BCB Red batsman Mosaddek Hossain, who made 28 off 25 balls, said after the match.

“I think it was a good practice game for the bowlers as well as they understand how to bowl on the good wicket in such scorching heat.

“As we will play with our full-strength side, we will be in the field to win the series (against Sri Lanka),” he added.

The visitors will also play an intra-squad practice match at the same venue today.