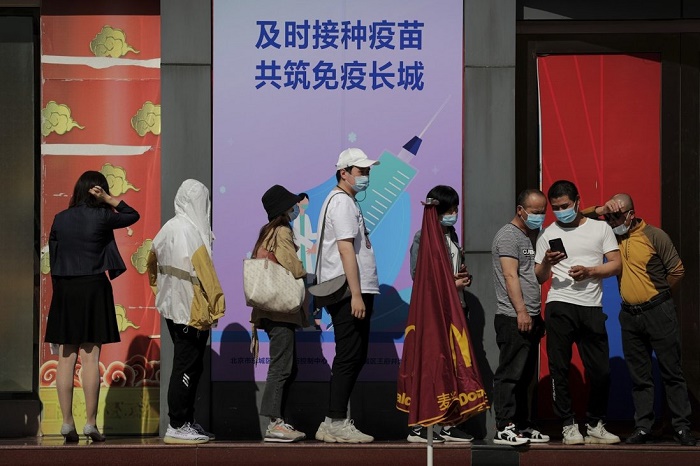 Covid-19 outbreaks show the virus will spread once the world is less vigilant about the pandemic, while slow global vaccine roll-outs risk more variants emerging, a Chinese infectious disease specialist has warned.

“Most of the world has not yet been vaccinated. Even in countries with abundant supplies, the vaccination rate might hardly reach herd immunity level that can effectively block transmission,” wrote Zhang Wenhong, the head of Shanghai’s Covid-19 clinical team, on the Chinese social media platform Weibo on Sunday.

“Vaccine roll-out is not fast enough and the possibility of the virus mutating and escaping [protection from the vaccines] is increasing.”

China reported five local Covid-19 infections on Monday: three from the northeastern province of Liaoning; and two from southeastern Anhui province. As of Sunday, 10 coronavirus patients and nine others who did not show symptoms were being treated in hospitals in Liaoning, while Anhui’s outbreak saw 14 infections in the cities of Hefei and Luan.

At least five officials from the two provinces were dismissed and dozens of others received warnings for dereliction of duty after failing to prevent the recent clusters.

While the absolute number of jabs given in China is the highest in the world – more than 406 million doses, or around 29 doses per 100 people – its statistics do not specify how many of the 1.4 billion population have had only the first dose of a two-dose vaccine or how many are fully vaccinated.

The country saw a ramp-up in shots after local transmissions were detected for the first time in months, administering a record 14 million doses on Sunday.

On Friday, China approved a locally developed Covid-19 vaccine for emergency use, adding a sixth shot to the mass vaccination drive.

The developer, Shenzhen Kangtai Biological Products, said it was conducting phase 3 trials for the inactivated vaccine, which uses similar technology to three other vaccines that have already been rolled out nationwide.

The company has also obtained the rights to supply the Oxford-AstraZeneca vaccine in China and could produce 400 million doses per year.

Zhang said the district of Bayuquan in Yingkou in Liaoning, and Taiwan, which were both grappling with renewed outbreaks, had not reached herd immunity through vaccination, adding that the patients in Yingkou, a port city in Liaoning, and Luan in Anhui had not been vaccinated.

His view that the global vaccine roll-out was slow and uneven echoed that of the World Health Organization.

On Friday, WHO director general Tedros Adhanom Ghebreyesus urged wealthy countries to donate vaccines to the global sharing scheme Covax Facility for those at high risk in developing countries, instead of vaccinating their own lower-risk groups

“Because in low and lower-middle income countries, vaccine supply has not been enough to even immunise health and care workers, and hospitals are being inundated with people that need life-saving care urgently,” he said, adding that only 0.3 per cent of vaccine supply was going to low-income countries.

Israel has one of the highest vaccination rates in the world, with nearly 60 per cent of its people fully vaccinated against Covid-19. Chile’s rate stood at about 40 per cent, the United States at 36 per cent and Britain at almost 30 per cent.

But some advanced economies are still lagging behind, such as New Zealand at 2.5 per cent and Japan – host of the Olympic Games in Tokyo from late July – at 1.37 per cent.