How a 17-foot, 3D-printed twin of Michelangelo's David in Dubai could help revive tourism in Florence 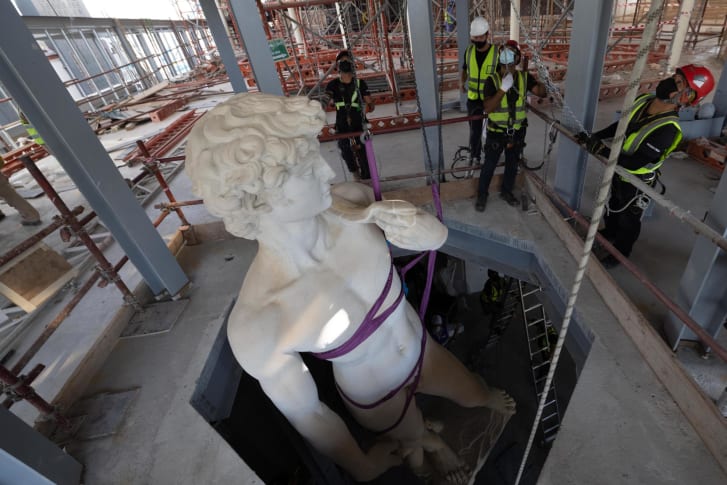 Michelangelo's statue of the biblical hero David before he slays the giant Goliath is one of the world's most famous artworks.
Now, 500 years after its creation, it is at the forefront of digital innovation.

Researchers at the University of Florence have created an exact replica of the statue for Italy's Pavilion at this year's Expo 2020 Dubai -- using cutting-edge, 3D-printing technology.

The university's engineering department began working with Swedish technology company Hexagon last year, says Grazia Tucci, a professor of geometrics at the University of Florence, who coordinated the project. While Michelangelo worked on the statue for three years, Tucci says it took the team just four months to create the replica.

"We have now the most faithful reproduction of the David," Tucci said.
A team from the school of engineering at the University of Florence, during the scanning of the original David.

A team from the school of engineering at the University of Florence, during the scanning of the original David. Grazia Tucci (right) led the collaborative project. Credit: Massimo Sestini for Italy Expo2020
'A digital twin'

The team made thousands of digital scans of the 17-foot-tall statue. According to Tucci, the size of the sculpture was a constant challenge: the team had to construct a special tripod to scan David from head to toe, and finding a 3D printer large enough to produce the replica in one piece was impossible. Instead, the statue was divided into 14 printable pieces and then assembled by hand.

Made from acrylic resin, the new statue weighs less than a tenth of the marble sculpture, estimated to be around 12,000 pounds. Expert art restorers pieced together the 3D-printed parts and applied the final touches with glue and marble dust.

Tucci calls the new statue a "digital twin" and said the methodology used by her team presents a new way for cultural heritage to be preserved. Right now, the proprietary technology is not publicly available, but Tucci said she hopes it will be shared to benefit more historical artworks.

'Theatre of Memory'
Digital David will be the centerpiece of the "Theatre of Memory," part of Italy's Pavilion at Expo 2020 where it was unveiled last month, said Paolo Glisenti, commissioner-general for Italy at Expo 2020 Dubai.
Dubai gives a glimpse inside its Expo Sustainability Pavilion

"We want to be the ambassadors of a new Renaissance, bringing here one of the historic pieces of art that are in Italy," said Glisenti. Italy's Pavilion evokes the past in new and imaginative ways, blending "memory and contemporary technology" to suggest a future that is both digital and rooted in traditional arts, he adds.
Expo 2020, which begins in October after being delayed a year by Covid-19, will show the way forward in a post-pandemic world, creating solutions in sustainability and technology, said Glisenti. "It's the perfect point in the world to show our vision of the future."

A new hope for tourism
Like many destinations reliant on tourism, Florence has suffered during the pandemic. The city typically attracts visitors from around the globe who flock to its Medieval center for a chance to see renowned Renaissance artworks. In a typical year, around 1.4 million visit Florence's "Galleria dell'Accademia," where Michelangelo's is housed. But in 2020, visitor numbers dropped by 81%, according to a survey.

While tourism recovers, the Digital David is a new opportunity for Italy and Florence to showcase their artistic ingenuity to the world, said Dario Nardella, Mayor of Florence. The 3D-printed statue is a "representation of how humanity is now reaching a very sophisticated level in technology and creativity," Nardella said.

Art galleries are exploring more ways to digitize the museum experience. During extensive closure periods over the last year, the Galleria dell'Accademia took the opportunity to complete renovations and reconfigure its layout. It reopened this month with the launch of an online program that includes virtual tours, YouTube explainer videos, and a new podcast about its masterpieces.

Michelangelo spent three years carving the original statue, while the new version took just four months to scan.
With Expo 2020 Dubai expected to attract 25 million visitors over its six-month run, Nardella is hopeful that the Digital David will inspire more tourists to see the original.

"David is a symbol of prosperity, a symbol of energy, of freedom, and especially a symbol of peace," he said. "So, this event is a big opportunity for our spirit and to recover our city and old arts in Italy."