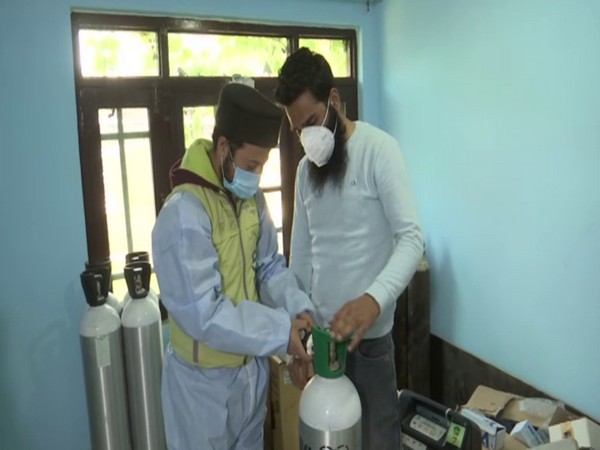 As Jammu and Kashmir witnesses a continuous rise in oxygen demand in the midst of the second wave of the Covid-19 pandemic, several non-profits organisations in the union territory have come forth to decrease the burden on hospitals and other Covid care centres.

With as many as 50,925 active Covid-19 cases to treat in the union territory, the non-profit organisations hope to provide relief to as many people in the valley.

According to Waseem Ahmad, a resident of Srinagar, who witnessed a first-hand account of the second wave of the pandemic, believes that the number of Covid-19 patients continues to increase at present.

“The number of patients is continuously increasing and not everyone can be admitted. There are times when some patients are not very critical but require oxygen at home on doctors’ recommendation. In such cases we seek help from NGOs,” said Waseem.

He also told ANI that “people who belong to lower-income communities can avail services from these NGOs free of cost.”

One such organisation which has been providing medical oxygen to Covid-infected patients is Social Reforms Organisation (SRO) in Jammu and Kashmir.

Shahid Majeed Dar, who is in charge of the organisation, stressed that with the spike in cases, there has been increasing pressure on the health care workers. “We are working as much as we can. There is a lot of pressure on doctors at the government hospitals, thus it is our duty to help to people,” said Dar.

Not only do NGOs help individual and their families, but they also fulfill demands from hospitals at times, Dar told ANI.

He said, “We have oxygen cylinders and concentrators. Sometimes we get calls from hospitals also asking for supply, and we cater to them also.”

An attendant to a Covid patient, Imtiyaz Ahmad, who visited the NGO, appreciated their efforts saying that “they are very cooperative.”

A regular visitor of SRO, Ayaz Ahmad, who claims to be a helping hand of others amid the pandemic said that he has sought help from the NGO multiple times not only for oxygen but also for wheelchair and other medical needs.

Ahmad said, “I am also a helping hand to somebody. I have been here five-six times, for oxygen cylinder or concentrator or wheelchair. They have played a huge role.”

Earlier, Divisional Commissioner Kashmir, Pandurang K Pole on Tuesday commented that there are chances the mortality rate will remain the same or increase in the next few days.

However, according to him, Kashmir is in a comfortable position currently as there are five oxygen manufacturing plants while 20 more oxygen generation plants have been installed at different hospitals.

As per official data released by the Union Health Ministry, Jammu and Kashmir has recorded 3,293 Covid-19 deaths since the onset of the pandemic. Meanwhile, 1,97,701 people have recovered from the infection.