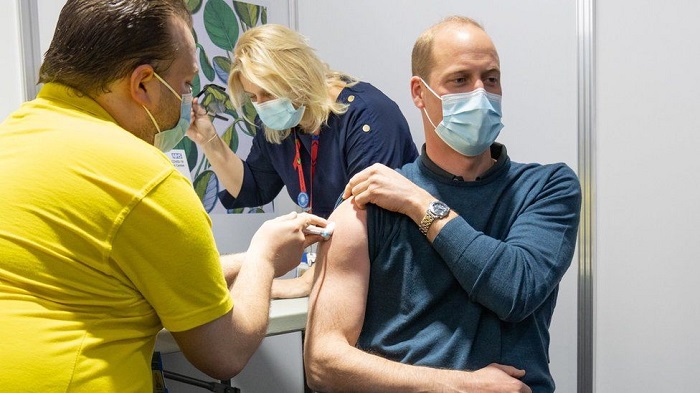 The Duke of Cambridge has paid tribute to those involved in the vaccine rollout after getting his first Covid jab on Tuesday.

The 38-year old shared a photograph showing him being vaccinated by NHS staff at the Science Museum in London.

He is the latest senior royal to share having received the vaccine, following the Queen and the Prince of Wales.

"To all those working on the vaccine rollout thank you for everything you've done and continue to do," he tweeted.

Prince William is among nearly 37 million people in the UK - around 70% of the population - to have received their first dose, according to the government's latest statistics.

People in England aged 34 and over are now able to book their Covid-19 jab.

It is not known which vaccine the duke was given, or if the Duchess of Cambridge, 39, has received her first dose yet.

Most adults under the age of 40 in the UK are being given an alternative to the Oxford-AstraZeneca vaccine due to a link with rare blood clots.

The duke has previously spoken out in favour of Covid vaccines, hailing the "monumental" success of the programme and expressing his desire to have his first dose.

He contracted Covid last April, at a similar time to his father Prince Charles, and was treated by palace doctors. He was reportedly able to carry on with telephone and online engagements.

In January, it was announced that the Queen had received her Covid jab from a household doctor at Windsor Castle. Prince Charles and the Duchess of Cornwall received theirs in February.

The progress of the vaccine rollout varies across the UK. Over-30s are eligible in Scotland, while Northern Ireland has started offering the vaccination to anyone aged over 25.

In Wales, some areas have seen almost half of those aged under 30 receive first doses.