Cyclone Tauktae: Twenty-six dead after barge sinks due to cyclone 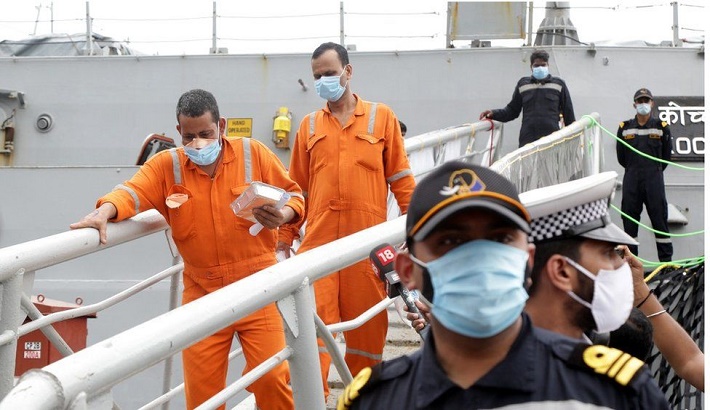 Twenty-six bodies have been recovered off the coast of India's Mumbai city where a barge with 261 people on board sank on Monday during a severe cyclone.

The death toll is expected to rise as rescue operations continue. At least 53 people are still missing.

A navy warship returned to the city's harbour on Wednesday with some of the 186 survivors rescued so far.

Thirty-five people have also been rescued from another of the three other barges stranded due to cyclone Tauktae.

The cyclone weakened after it made landfall on Monday, but at least 19 people are confirmed as having died on land in the storm.

The barge was working on a project for India's Oil and Natural Gas Corporation (ONGC). It was carrying personnel deployed for offshore drilling. When the storm struck, the barge's anchors gave way and it began drifting.

The navy had mounted a massive air and sea rescue mission for the missing oil workers, which has been hampered by huge waves.

"There are waves of 20 to 25 feet (six to 7.6m), the winds are high and the visibility is low," said navy spokesman Vivek Madhwal.

About 200,000 people were evacuated across several states as the cyclone approached, bringing with it heavy rains and gusty winds. Tauktae is the strongest cyclone to strike the coast of Gujarat since 1998.

The storm has hit the region amid a devastating second wave of Covid-19 that has overwhelmed Indian hospitals.