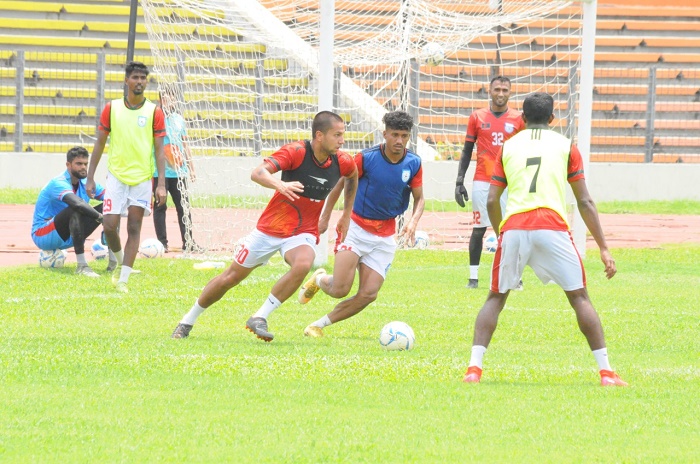 A Bangladesh Football Federation official said on Wednesday that they would continue their ongoing national camp for the upcoming FIFA, AFC joint qualifier matches despite one player coming corona positive.

“We’ve just two-week for the preparation. There is no going back. We have to continue the camp,” BFF Vice-President and National Teams’ Committee Chairman Kazi Nabil Ahmed told The Daily Sun.

“We will sit with concerned officials, coaches within two or three days. We may need to take some more strong steps to strict the health protocol, if necessary. We may test the team after four or five days and again before they leave for Qatar,” he added.

Ibrahim, a Bashundhara Kings midfielder, has no symptoms and is currently in isolation at Hotel Intercontinental. His room partner Sohel Rana, who was also tested twice, found negative. Sohel will join the camp on Thursday after he was too isolated on Wednesday.

A total of 40 members of Bangladesh national football team, including 32 players and eight officials, earlier underwent the Covid-19 test on Sunday. But, BFF started their practice at the Bangabandhu National Stadium the next day before getting the test reports.

Assistant coach Stuart Watkiss, who joined the team on the third day of camp at BNS on Wednesday, also believed that there is no other way but to do frequent tests.

“All we can do is frequently test everybody. I mean this is not much more we can do. Obviously, we can ensure everybody is wearing masks, washing their hands regularly.  I have to say it doesn't seem an issue for the players. They seem okay, they seem relaxed. They are doing the right things -- wearing the masks and keeping social distance,” said Watkiss.

“Everybody is ok. Ibrahim, unfortunately, has tested positive but we just have to carry on,” he added.

Winger Mohammad Abdullah said that they know how to work under the Covid-19 crisis and all of them are following the health protocol strictly.

“It (Covid-19) is not new. We know how to be safe under the Covid-19 crisis and we are following the health protocol strictly. Everyone is staying individually at the hotel and maintaining social distance. We aren’t allowed to go to other players’ rooms. We are wearing masks and following other instructions at the hotel and on the field,” he said.

Meanwhile, Bangladesh will leave Dhaka for Qatar on May 30 four days ahead of their first match against Afghanistan on June 3.

The other matches will be held against India and Oman on June 7 and 15 respectively.
The team will stay one day in quarantine there only if the medical test reports are satisfactory as per the information of Qatar health ministry.

The men in red and green are expected to play a practice match against Dhaka Abahani Ltd before their departure.