Israel-Gaza violence: The children who have died in the conflict 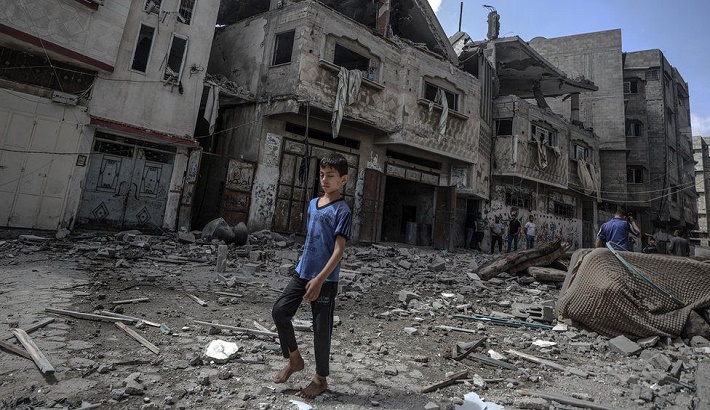 Of the 219 people who have died in Gaza, at least 63 are children, according to its militant-controlled health ministry. Of the 10 people killed in Israel, two children are among the dead, the country's medical service says.

Here are the stories of some of the children who have been killed:

When an Israeli strike hit al-Wihda street in central Gaza City early on Sunday, at least 13 members of the extended al-Kawalek family are believed to have been killed, buried in the rubble of their own home.

Many of the victims were children, with one said to be as young as six months.

"We saw nothing but smoke," one of the surviving members of the family, Sanaa al-Kawalek, told Felesteen Online. "I couldn't see my son next to me and I was hugging him, but I could see nothing."

The Israel Defence Force (IDF) described the bombing as "abnormal" and said the civilian casualties were unintended. A spokesman said air strikes had caused a tunnel to collapse, bringing houses down with it.

Among those killed were sisters Yara, 9, and Rula, 5. Both had been receiving treatment for trauma from the Norwegian Refugee Council (NRC).

The al-Kawaleks were polite girls who always did their homework on time, one of their teachers, who did not want be named, told the BBC.

A picture circulating online is said to show 10-year-old Aziz al-Kawalek, the only surviving member of his direct family, sitting by his mother's body.

The youngest victim on the Israeli side is thought to be Ido Avigal, a five-year-old boy killed last Wednesday in the southern town of Sderot.

Ido was killed inside a fortified room in what the Israeli military described as an "incredibly rare" incident.

His mother grabbed him and took him to the fortified room when incoming rocket sirens sounded on Wednesday evening in Sderot, the Times of Israel reports.

Rocket shrapnel pierced the protective metal plating used to cover the window of the room he was in, also injuring his mother and seven-year-old sister. He died of his injuries several hours later.

"We were at home and the kids were a little bored, so my wife Shani went with them to her sister's house two buildings over," Ido's father, Asaf Avigal, told Channel 13.

"I'm sorry I did not take the shrapnel in your place," Mr Avigal said at his son's funeral. "A few days ago, you asked me: 'Dad, what will happen if the siren goes off while we are outdoors?' I told you that so long as you were with me you would be protected. I lied."

A few months ago, Mr Avigal and his wife had spoken about what an especially bright child Ido was, as if he was a 50-year-old in the body of a five-year-old. He would often urge his father to leave the computer and spend more time with him. "Enough with the screens - be with me," he would say. Ido's mother remains in hospital.

Nadine Awad, a 16-year-old Arab-Israeli schoolgirl, was with her 52-year-old father in the early hours of last Wednesday, when a rocket struck their car and home, killing them both. Her mother, who was also in the car, was seriously injured, medics said.

Nadine's cousin, Ahmad Ismail, says he heard the sound of a rocket hitting from inside the family home, in the city of Lod, close to Tel Aviv, where Arab and Jewish Israelis live together.

"It happened so quickly," he told the public broadcaster Kan. "Even if we had wanted to run somewhere, we don't have a safe room."

Nadine was a "very special girl" in her first year of high school, who dreamed of becoming a doctor, those who knew her said.

Her school principal said she "had dreams of changing the world".

"She was such a special girl, such a talented girl. She wanted to conquer the world," Shirin Natur Hafi told local radio, the Times of Israel reports.

Nadine had been involved in a number of science-related and social projects with Jewish schools in the area, and she had planned to participate in a biomedical studies programme, Ms Hafi said.

Children of the al-Hadidi family, 6 to 13

On Friday, Muhammad al-Hadidi's four children - Suhayb, 13, Yahya, 11, Abderrahman, eight, and Osama, six - put on their finest clothes and went to visit their cousins nearby, in the Shati refugee camp outside Gaza City, to celebrate Eid, which marks the end of Ramadan.

"The kids put on their Eid clothes, took their toys and headed off to their uncle's house to celebrate," their 37-year-old father told reporters.

"They called in the evening to beg to stay the night and I said OK."

The next day, the building where they had been staying was hit. Only their five-month-old baby brother, Omar, survived, after being dragged from the rubble where he lay next to his dead mother.

"They were safe in their homes, they did not carry weapons, they did not fire rockets," Muhammad said of his children. "What did they do to deserve this? We're civilians."

Amid the wreckage were children's toys, a Monopoly board game and, sitting on the kitchen counter, unfinished plates of food from the holiday gathering.

"When my children went to sleep, they were hoping that when they woke up it would all be over. But they are gone now. I have only their memory, and the scent of them in my home," Mr Al-Hadidi told The Times.

Ibrahim al-Masry was playing with his siblings in the front yard of their home in a northern neighbourhood of Gaza last week, when a strike hit, according to reports.

Ibrahim and his brother Marwan, and several other relatives, were instantly killed.

"Every day in Ramadan they play in the street at this time before Iftar," their father, Youssef al-Masri, told The Independent.

"We didn't see it coming, we just heard two big explosions... Everyone was running in the street, children were bleeding, mothers were crying, blood was everywhere."

Their brother, also called Ibrahim, said they had been filling sacks of straw to sell at a local market.

"We were laughing and having fun, when suddenly they began to bomb us, everything around us caught fire," he told the AFP news agency.

"I saw my cousins set alight, and torn into pieces,"

Hamza Nassar had left his home in Gaza last Wednesday evening to get some vegetables so his mother could prepare a meal to break the Ramadan fast, according to reports. He never made it home.

Hamza was a nice kid and an excellent student, his father told Al Jazeera.

The same strike that hit the al-Kawaleks' home also took the life of their 13-year-old neighbour, Tala Ayman Abu al-Auf, and her 17-year-old brother Tawfik.

Their father, Dr Ayman Abu al-Auf, was also killed in the attack. He was the head of internal medicine at Gaza City's Shifa hospital, where he was in charge of its coronavirus response.

In the days before the attack, Dr Abu al-Auf had been working longer and longer hours at the hospital, family friends told the BBC.

Tala's teacher, who did not want to be named, describes her as an "excellent student" in seventh grade.

Tala was "interested in religious classes and she liked to read and memorise the Quran," the teacher told the BBC, adding that she was always ready for exams.

She had also been taking part in the NRC's programme to help children deal with trauma.

"This madness should stop... the violence should stop, in order to give these kids a future."