After facing criticism, Hong Kong govt says freezing of Jimmy Lai's assets has nothing to do with press freedom 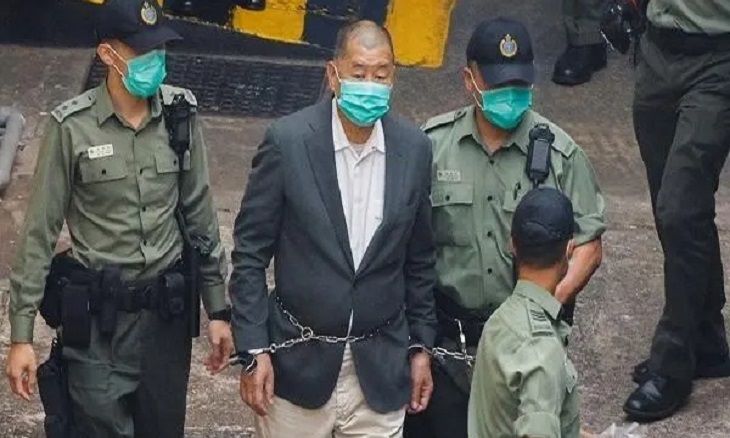 The freezing of HKD 500 million of Jimmy Lai's assets has nothing to do with press freedom, claimed Hong Kong administration after the city journalists association chided the latest action against the jailed media tycoon.

Secretary for Security John Lee Ka-chiu refused to go into details about the frozen assets, saying the government would make use of all legal measures to prevent and suppress any activities that endangered national security, South China Morning Post (SCMP) reported.

"Any activities that contravene the law, then the individuals or the related organisation will have to face the full force of the law," Lee said. "It is the illegal activities that we are dealing with, it is not press work."

The temporary suspension was revealed just before Lai, who is facing charges under the draconian Beijing-imposed national security law, arrived at court to face unauthorised assembly charges relating to a 2019 anti-government protest, according to SCMP.

The trading in Next Digital shares was 'temporarily suspended' from 9 am, as per the Hong Kong Exchanges and Clearing website. Lai holds 71.26 per cent of shares in the company, which publishes local tabloid-style newspaper Apple Daily.

Issuing a statement on Friday night, the Hong Kong government announced that the secretary for security had ordered Lai's shares in the Next Digital media company to be frozen, along with assets in the local bank accounts of three companies he owned, reported SCMP.

"In regard to the timing of my issuing the [freezing] notices, I [would] issue it when I have reasonable suspicion, [and belief] that the power should be exercised."

The Hong Kong Journalists Association chairman Chris Yeung Kin-hing questioned whether political factors were involved. "We are deeply concerned that the government's decision [to freeze Lai's assets] comes just around the same time that the police commissioner has repeatedly criticised Apple Daily's news coverage, claiming it to be publishing fake news and inciting hatred," they said.

This comes after Lai was sentenced by a Hong Kong court to 14 months in prison on Friday over an illegal assembly in August 2019.

Lai and some other protestors of the Hong Kong riots were convicted earlier by the local court for organising and participating in an unauthorised assembly on August 18, 2019, in Hong Kong.

Subversion was made a criminally punishable offence in Hong Kong last year under the Beijing-drafted national security law.

According to Beijing, the legislation criminalises activities related to terrorism, separatism, subversion of state power and collusion with foreign forces, while local pro-democracy activists and certain Western nations claim that the law undermines Hong Kong's civil liberties and democratic freedoms.

Beijing was perturbed by violent anti-government protests in 2019 and has imposed the national security law to take action against those who protested against the government. (ANI)