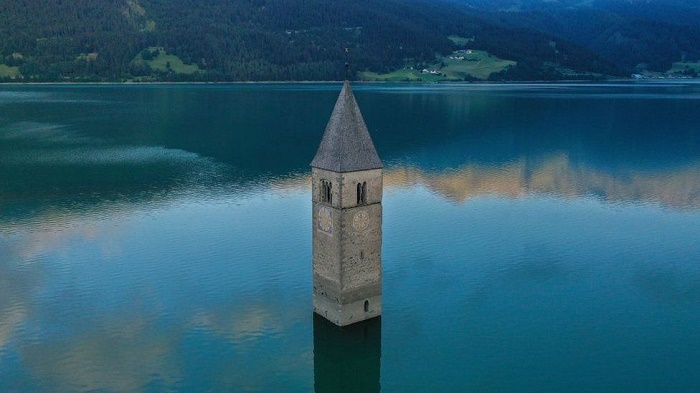 Repair works at a reservoir in Italy have revealed the remains of a village that had been submerged for decades.

Lake Resia, in the north of the country, is best known for the church steeple emerging from its icy waters.

The iconic scene has even inspired a book and a Netflix series.

But with the lake temporarily drained, locals have been able to see the final traces of Curon, a village once home to hundreds before it was flooded to create a hydroelectric plant in 1950.

Lake Resia - or Reschensee as it is known in German - lies in South Tyrol, the Alpine region that borders Austria and Switzerland.

Photos shared on social media show steps, cellars and walls on what would normally be the lake's bed, close to the more recognisable 14th-Century church tower.

Luisa Azzolini, who is from the region, tweeted that it was a "strange feeling" to be walking amid the rubble of the former village.

The village of Curon was lost to the waters in 1950 when authorities decided to build a dam and merge two nearby lakes - despite the objections of its residents.

More than 160 homes were submerged, and Curon's population displaced - although some decided to remain in the new village created nearby.

Nowadays, the lake is popular with hikers in summer, with visitors in winter able to walk across the frozen surface to reach the spire.