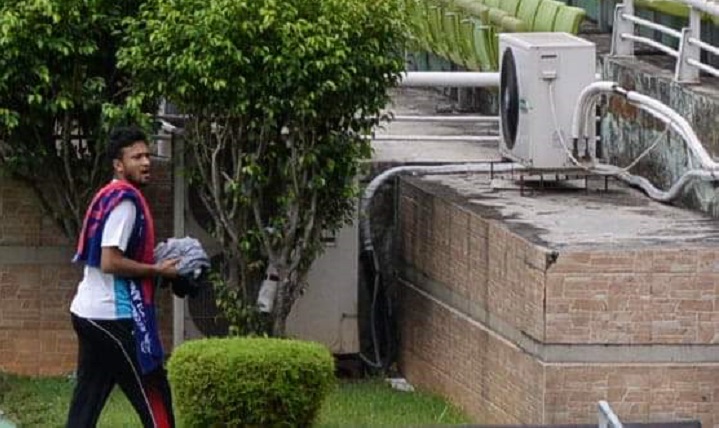 Bangladesh all-rounder Shakib Al Hasan joined his national team-mates at the Sher-e-Bangla National Stadium in the capital on Tuesday as the Tigers officially resumed their practice session after Eid break for their upcoming one-day international series against Sri Lanka.

Pacer Mustafizur Rahman is also expected to return to the field on the same day after their mandatory 14-day quarantine was relaxed to 12 days by the ministry of health.

Earlier, Shakib and Mustafizur returned home from India on May 6 after taking part in the Indian Premier League.

Shakib went straight to Hotel Four Points by Sheraton while Mustafizur and his wife went to Pan Pacific Sonargaon Dhaka Hotel after arriving at Hazrat Shahjalal International Airport and completed their mandatory institutional quarantine over there.

Both the cricketers came out Covid-19 negative in multiple tests over the last few weeks.

Shakib and Mustafizur represented Kolkata Knight Riders and Rajasthan Royals respectively in the 14th edition of the cash-rich competition, which was suspended midway amid the rise of the coronavirus cases in India.

They reached Dhaka early through a special arrangement as all air travel was suspended between India and Bangladesh.

Mustafizur, on the other hand, played all seven matches for Rajasthan and took eight wickets for his side.

The Tigers are scheduled to host three one-day internationals against Sri Lanka with the first match taking place on May 23 at the Sher-e-Bangla National Stadium while the remaining two matches will be played on May 25 and 28 respectively at the same venue.

Sri Lanka team arrived in the city on Sunday and they will start their practise on Wednesday after completing their three-day quarantine in a city hotel.