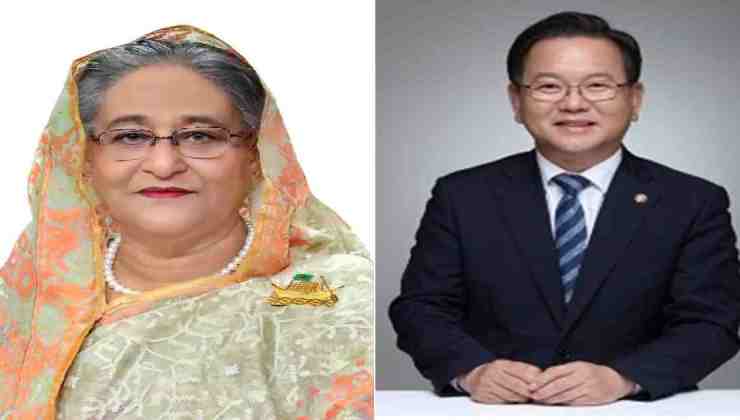 Prime Minister Sheikh Hasina on Monday said that the friendship and collaboration between Bangladesh and Korea have greater potential in some areas including trade and investment to work together for mutual benefit of the two countries.

In a congratulatory message sent to the newly elected Prime Minister of the Republic of Korea, Kim Boo-Kyum, she said, “‘I sincerely believe that our friendship and collaboration have vast potentials to be realised through greater trade, investment, human resource development and technical cooperation for the benefit of our two peoples.”

Sheikh Hasina, on behalf of the people and the Government of Bangladesh, extended her warmest congratulations to new premier of Korea, wishing that Mr Kim will lead his country successfully towards greater peace and prosperity with his political acumen and stewardship.

The Prime Minister reiterated that the bilateral relations between Bangladesh and South Korea are evinced by shared values of mutual trust and respect, commonalities of history, conviction to peace, security, and prosperity for all.

She mentioned that Bangladesh deeply values its close, friendly and multifaceted ties with the Republic of Korea which has further strengthened in recent years.

Sheikh Hasina appreciated the increased Korean investment in the infrastructure and socio-economic development programmes of Bangladesh.

The Prime Minister took the opportunity to express deep appreciation for the continued participation of the Government of the Republic of Korea in the development initiatives of Bangladesh, saying: “We strive to build the “Sonar Bangla” – the Prosperous Bangladesh, as envisioned by the Father of the Nation Bangabandhu Sheikh Mujibur Rahman.”

She extended her firm belief that the existing friendly relationbetween the two peoples will further consolidate during his term in the office.

Sheikh Hasina said that she looks forward to working closely with Mr Kim to further develop the existing relations between the two friendly countries and jointly taking partnership to new heights.

She extended invitation to Mr Kim to visit Bangladesh at a mutually convenient time.

The premier expressed willingness of her government to work closely with Korea on regional and global issues.

In this regard, the Prime Minister put emphasis on early, safe and sustained repatriation of the Rohingyas to Myanmar which is vital for the peace, stability and security of the region.

She mentioned that this protracted crisis has potentials to destabilise the region. Bangladesh appreciates Korea’s continued engagements in various fora, including the UN, in resolving the Rohingya crisis, she added.

The Prime Minister concluded with conveying her best wishes for Mr Kim’s good health and happiness, and for continued peace, progress and prosperity of the friendly people of the Republic of Korea.