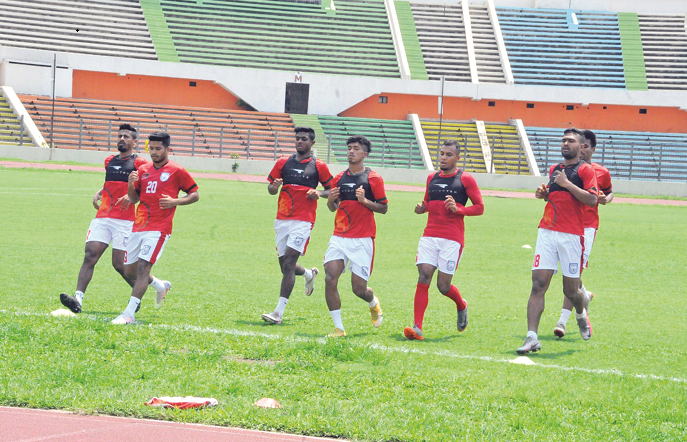 The national players underwent the ‘Yo-Yo test’ on the first day of their practice session and almost all of them cleared the passing mark which was 25.

“We've done the Yo-Yo test this morning to judge their fitness levels. Obviously, they need to be at the same level to be selected for the national team. I think I got them at the same level today,” Jamie told the reporters after the end of the practice session.

“If they were not, we obviously would test them again next week. But everyone seems to be in good enough condition at this moment.

“Their fitness level is fine. They were very well in the session today. I'm hoping they will be sharper in the next three or four days. They are good athletes now. They look after themselves and eat the right food.

“Everyone is at the level that we need them to be. My job in the next three weeks is to make sure their peak condition before we play on June 3,” he added.

The Englishman, however, expressed his disappointment over defender Bishwanath Ghosh’s injury but informed that he won’t add any player in his place.

Bashundhara Kings defender Bishwanath has been sidelined for almost two months after having a serious thigh injury during the national team’s first match against Kyrgyzstan U-23s in Three Nations Cup held in Nepal in March.

Jamie, however, put Bishwanath in the 33-member squad for joint qualifiers considering his performances in the ongoing domestic league and national team's previous assignments. But Kings refuse to release him because he is yet to be fit.

“The biggest disappointment is Ghosh (Bishwanath). I've tried to tie him up with the camp but he is still recovering from his injury.

“We have enough players. We have 33 players in the camp. So, we won’t call anyone,” Jamie added.

The first day of training was held in the scorching heat in the capital. Forward Mahbubur Rahman Sufil believed the current weather in Dhaka will help them to adapt to the warm temperature in Qatar.

“We know Qatar is too hot. The air, the weather there are also warmer than ours. So, I think these sessions will help us to adapt to the hot temperature,” Sufil said.

Bangladesh will leave Dhaka for Qatar next week to play their remaining three matches of joint qualifiers against Afghanistan, India and Oman on June 3, 7 and 15 respectively at Doha.