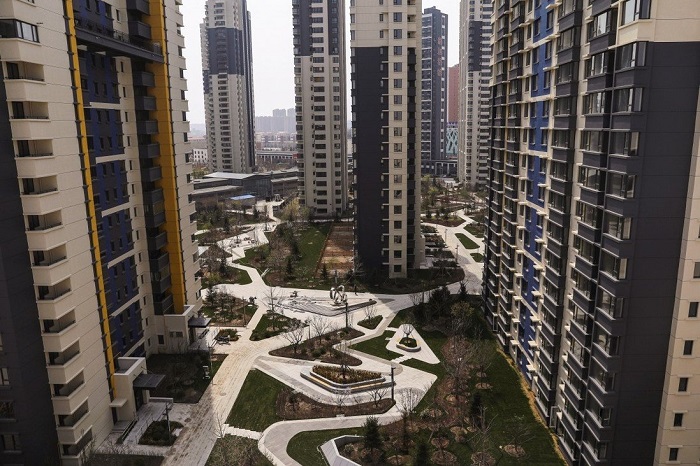 The Singapore City residential development in Dandong’s New District Zone is the closest to the new Yalu River bridge across the Chinese border with North Korea.

A walk at night through New District, in the city of Dandong on China’s northeastern border with North Korea, gives little indication that just a few years ago it was the scene of feverish speculation that it was about to boom with the opening up of the hermit kingdom.

Just a few lights shine from the flats in the 30-storey residential buildings near the deserted Yalu River bridge, unused since its completion in 2013, which was supposed to make the journey to North Korea’s Sinuiju city on the opposite bank a mere five-minute drive.

It was very different in 2018, when house prices in some areas of New District rose by more than 50 per cent in just a few days after a historic summit between North Korea’s leader Kim Jong-un and his southern counterpart Moon Jae-in at the end of April.

Throughout that year, the growing sense of detente on the Korean peninsula – marked also by Kim’s first visits to China and his unprecedented meeting with then US president Donald Trump – gave Dandong, with a population of just 2.5 million, the biggest house price surge in the country, which continued into 2019.

Demand has dropped since then, as hopes of roaring trade with North Korea were dashed by the outbreak of the pandemic last year which prompted Pyongyang to seal off the country. Travel was banned and trade by road, rail and sea almost entirely suspended.

Latest government numbers showed Dandong’s house prices in March recorded a four per cent increase on last year – in line with the general investment atmosphere among the 70 government-tracked cities in the country. A new three-bedroom flat with a river view in New District today costs 7,000 yuan per square metre (US$100 per square foot) – not much higher than it would have been worth when speculation stalled in 2019.

At least 70 per cent of trade between China and North Korea has traditionally passed through the gateway city of Dandong, with trucks and freight trains crossing the Sino-North Korean Friendship Bridge into the downtown area. New District was developed from scratch in anticipation that the new Yalu River Bridge would further boost trade.

No official reason has been given for the delay in opening the dual carriageway bridge, but it is widely understood that Pyongyang’s agreement has yet to be given for it to go ahead. Meanwhile, the surrounding facilities which cost the Chinese government billions to develop – including two special economic zones, gleaming residential buildings and malls – stand mostly empty.

A property agent for Singapore City, the residential development closest to the new bridge, said there had been a significant change in the composition of interested buyers since the inflated prices in 2018.

“The composition of our latest customers is different from 2018, when the price surge was most significant. In the past we had buyers coming in from all over the country, and a lot from the northeastern provinces who only bought the flats for investment purposes,” she said.

“Now, people who buy are locals who would like to live in a new flat and are not betting on the time of the opening of the bridge.”

The agent said the market had definitely become quieter since last year “but I would say our potential for price surge is still the strongest in the area. If [the bridge] does open, our housing compound will be the closest to it. Every square metre will go up at least 15 to 20 per cent immediately when [the bridge] does open”.

Singapore developer Brothers Holdings broke ground on the compound in 2008 and, after five sluggish years when annual sales were fewer than 100 units, it became the top-selling development in the area in 2018, the agent said, with more than 500 units sold in May alone.

The picture was not always so rosy for Dandong’s property market. In 2016, it had the worst-performing residential market among China’s 70 major cities, as Sino-North Korean relations soured over Beijing’s backing for stricter UN sanctions on Pyongyang in response to its fourth nuclear test.

“When you really live here, you don‘t actually bet on these hopes any more,” said a retired local teacher, who bought his flat before the 2018 price surge. “I really thought this area was better for my retirement because the flats are newer, less busy. But honestly, this is only a place for the retired, because there’s not much happening around here, and I have to go downtown for any medical issues because we only have a clinic here.”

A couple with a two-year-old child said they moved to New District two years ago because of the good schools in the area. “But there’s nothing else, no shops are really open and it’s just inconvenient to even call a cab,” one of the young parents said.

A property agent, who set up his booth at the open car park in front of the new bridge, tried to counter the prevailing view by selling an optimistic outlook to potential customers. “It’s because of the pandemic that border trade and normal activities between the two countries are stalled, not because something bad has happened in bilateral relations,” he said.

“There’s no plunging of property prices, showing expectations have not changed. The most important thing is that the government will not give up investing in this area, because the bridge is already built. It has to open some day, right?”