Why is Gaza blurry on Google Maps? 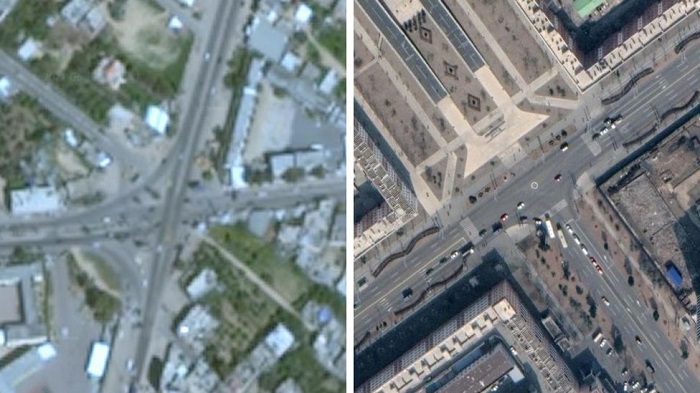 Why is Gaza, one of the most densely populated places in the world, blurry on Google Maps?

It's an issue that has been highlighted by researchers using open-source, publicly available information - including mapping data - to locate attacks and document the destruction.

In fact, much of both Israel and the Palestinian territories appear on Google Earth as low-resolution satellite imagery, even though higher-quality images are available from satellite companies.

It's barely possible to see the cars in Gaza City.

Compare that with Pyongyang, the secretive capital of North Korea, where the cars are sharply defined and it's possible to make out individual people.

Why is satellite imagery important?
It has become a vital element in the reporting of conflict, but there are also concerns the availability of detailed images can compromise security.

In the latest Middle East confrontation, investigators are looking to corroborate the locations of missile fire and targeted buildings in Gaza and Israel, using satellites.

"The fact that we don't get high-resolution satellite images from Israel and Palestinian territories sets us back," says Samir, an open-source investigator.

However, on Google Earth, the most widely used image platform, the most recent imagery for Gaza is of low resolution and therefore blurry.

"The most recent Google Earth image is from 2016 and looks like trash. I zoomed in on some random rural area of Syria and it has had 20+ images taken since that time, in very high resolution," tweeted Aric Toler, a journalist for Bellingcat.

Google says its aim is to "keep densely populated places refreshed on a regular basis" but this hasn't been the case with Gaza.

Are high-resolution images available?
Until last year, the US government restricted the quality of satellite images that American companies were permitted to provide on a commercial basis.

The Kyl-Bingaman Amendment (KBA) had been introduced in 1997 to address Israeli security concerns.

Although the ruling only referred to Israel, it was also applied the restriction to images of the Palestinian territories.

The KBA limited image quality so that an object the size of a car was just about visible as a highly blurred image, but anything smaller would be very difficult to identify.

"We [Israel] would always prefer to be photographed at the lowest resolution possible", said Amnon Harari, head of space programmes at Israel's Defence Ministry last year, reported by Reuters.

"It's always preferable to be seen blurred, rather than precisely."

It's not uncommon that sites such as military bases have been blurred - but the KBA was the only case of such a wide area being subject to such a restriction.

However, once non-US providers, such as French company Airbus, were able to supply these images at a higher resolution, the US came under increasing pressure to end its restrictions.

In July 2020, the KBA was dropped, and now the US government allows American companies to provide far higher-quality images of the region (so that objects the size of a person can be readily picked out).

"The initial motivation was scientific," says Michael Fradley, an archaeologist at the University of Oxford and one of the academics who successfully campaigned for the amendment to be changed.

"We needed access to high resolution over the Occupied Palestinian Territories comparable to what we use over other parts of the region."

So why is Gaza still blurry?

Apple said it was working to update its maps soon to a higher resolution.

Google told us that its images come from a range of providers and it considers "opportunities to refresh [its] satellite imagery as higher-resolution imagery becomes available". But it added that it had "no plans to share at this time".

"Considering the importance of current events, I see no reason why commercial imagery of this area should continue to be deliberately degraded," said Nick Waters, an open-source investigator for Bellingcat on Twitter.

Who actually takes the images?
Public mapping platforms, such as Google Earth and Apple Maps, rely on companies that own satellites to supply imagery.

Maxar and Planet Labs, two of the largest, are now making available high-resolution images of Israel and Gaza.

These much higher quality pictures can reveal detail down to half a metre or less.

"As a result of recent changes to US regulations, the imagery of Israel and Gaza is being provided at 40cm resolution," Maxar said in a statement.

Planet Labs confirmed to the BBC it supplies imagery at 50cm resolution.

Open-source investigators, however, rely heavily on the free-to-use mapping software and don't often have direct access to these high-resolution images.

What else can high-resolution imagery reveal?
Satellite imagery is used for many purposes, including tracking deforestation and forest fires, as well as investigating human rights abuses around the world.

Researchers at Human Rights Watch teamed up with satellite providers Planet Labs in 2017 to show the destruction of Rohingya villages by the military in Myanmar.

The imagery enabled them to map the extent of damage to more than 200 villages in the area, by comparing 40cm-resolution satellite imagery of these areas from before and after.

The evidence appeared to corroborate claims from Rohingya, who had fled Myanmar to neighbouring Bangladesh, that their homes had been targeted by the military.

Satellite imagery has also been vital in tracking what's been happening in the Xinjiang region of China, including the network of "re-education" centres set up there for the Uyghurs.

The information has helped to show where these facilities have been built, and high-resolution images have also given an idea of their size and particular features.