Why the Quad should morph into a treaty-based economic alliance 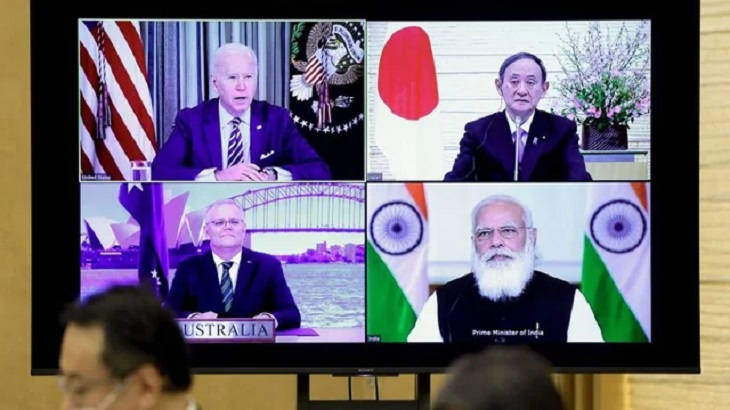 As India struggles with highly-infectious variants of the coronavirus and the world tries to lend a helping hand, Chinese Communist Party (CCP) rulers are busy exploiting a passing rift between Washington and New Delhi over the Biden administration’s tardiness in committing its help to curb the devastating COVID-19 spike. In doing so, they reveal a deep unease about India’s growing friendship with America, and about the Quadrilateral Security Dialogue (Quad), an informal alliance between the U.S., Japan, Australia and India that some believe could become a Southeast Asian military alliance.

Chinese state media gleefully mocked India’s tragedy while seeking to sow discord between the two largest democracies. The latest U.S. effort “displays how this so-called political alliance failed to address India’s major concerns,” says a piece published by the state-controlled Global Times. An editorial in the same publication says the U.S. “thinks it should realize immunity [first] and then distribute the inferior vaccines to other countries while the latter must be grateful for such U.S. ‘goodness’ and jointly help safeguard the ‘American First’ order,” referencing what China apparently claims to be President Biden’s continuation of former President Trump’s governing political philosophy.

On April 24, Chinese Foreign Ministry spokesman Wang Wenbin told reporters that India had received little help from the other three countries of the Quad and that China could provide the support India needs, a renewed effort by Beijing to disrupt the partnership that many consider key to countering China’s growing ideological and geopolitical influence.

It is understandable that Beijing regards the Quad as an attempt by the U.S. to isolate China in Asia. But the Quad owes its existence to the aggressive foreign policies pursued by Chinese leader Xi Jinping over the past decade — from a military buildup in the South China Sea to the promotion of a high-tech-driven form of autocracy as a governance model under the cover of United Nations-based multilateralism. Fourteen years ago, the Quad began as an informal dialogue based on shared respect for democracy, coupled with some joint military drills. However, shortly after the Quad’s formation in 2007, its operations ceased when China lodged diplomatic protests against the member states.

A decade later, Quad representatives grouped during the 2017 ASEAN Summit, spurred into action by China’s increased efforts to dominate the South China Sea and territorial rifts with the Philippines and Vietnam. Mounting threats from China’s expansion scheme paved the way for “Quad 2.0.”

The concern always has been China’s aggressive approach towards internalizing the Indo-Pacific region, which the CCP has sought to endanger through various means, such as developing military installations on disputed atolls and obstructing passage through key straits. In February, China ratified a law permitting the use of armed troops to solidify its “nine-dash line” claim covering nearly the entire South China Sea.

The establishment of the Quad was intended to create an “Arc of Democracy” in Asia, and many observers view it as a move by Asian powers, in collaboration with the United States, to curb China’s coercive, growing influence.

For its member countries, the Quad represents an opportunity to collaborate on projects of mutual interest. Quad members share a vision of an open and prosperous Indo-Pacific, along with the advancement of maritime freedom and security. The group held its first summit in March, when leaders jointly agreed to tackle climate change and the COVID-19 pandemic. They also launched a tangible, potentially significant project: to jointly manufacture and distribute up to 1 billion doses of coronavirus vaccine throughout Southeast Asia by the end of 2022.

Like most of what the four leaders said and did, the vaccine drive is not explicitly aimed at China. However, it will offer an alternative to Beijing’s own pandemic politics aimed at extending its influence in the region. Chinese Foreign Minister Wang Yi recently met with his counterparts from Afghanistan, Pakistan, Nepal, Bangladesh and Sri Lanka and told the foreign ministers that China is willing to collaborate with them on vaccine production and distribution.

China’s rulers are intent on ensuring that the Quad is not expanded to include countries in Central Asia, Southeast Asia and the Korean Peninsula. In March 2020, Beijing issued a statement of protest after a “Quad Plus” meeting was held to discuss the impact of COVID-19. In addition to the four member states, that meeting included representatives from South Korea, Vietnam and New Zealand.

A major difficulty facing the Quad members — as well as other U.S. allies that the Biden administration is trying to bring on board — is that trade with China is important for all of them, even though all share Washington’s concerns about China’s military and territorial aspirations, economic mercantilism, abysmal human rights record, and subversion of universal human rights norms in international forums.

Indeed, the potential economic downside in confronting China is high. When Australia, for example, banned Huawei and called for a probe into the origins of the COVID-19 outbreak, China responded by imposing economic sanctions that resulted in severe economic losses to Australia. Canberra has refused to blink in this bilateral face-off. In March, Australia scrapped two agreements between the Victoria state government and Chinese companies under the Belt and Road Initiative, Xi’s pet expansionist project. The CCP chastised Australia for “not sincerely trying” to ameliorate China-Australia relations. Last week, China suspended economic dialogue with Australia.

The incident shows that if the Quad is to function properly, members must consider forming an economic “NATO” — a treaty-based economic alliance, wherein all commit to defending each other economically if China retaliates against any member. To realize such an initiative would require patience, discipline and long-term focus. It would be an appropriate response to the CCP’s own decades-long strategy of creating allies by coercion, rather than consent, and punishing trade partners that stand up on behalf of fundamental moral principles.