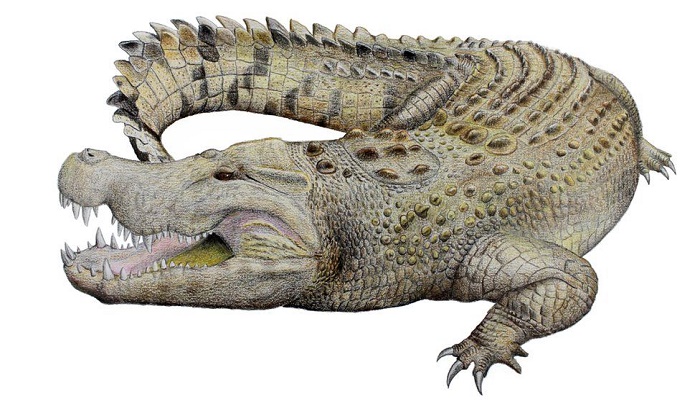 An eight-million-year-old crocodile skull discovered in central Australia is now believed to be part of an extinct species new to scientists.

It was thought to belong to a known reptile of the Baru genus but that has now been updated with new study.

The species is expected to be named in 2022, and there is a Baru exhibition in the NT.

Dr Adam Yates, senior curator of Earth Sciences at the Museum and Art Gallery of the Northern Territory, said the skull was found at the Alcoota fossil site in central Australia.

Dr Yates told the BBC the skull was by far the best specimen of a Baru crocodile yet found.

"It tells us about a new species that we didn't realise was inhabiting central Australia. It's somewhat surprising to imagine that central Australia had rivers to support crocodiles," he said.

"It's one more thread in the tapestry in understanding the way Australian fauna has evolved over time."

Dr Yates said that while it was known that the Baru genus roamed this part of the country many millions of years ago, the ancient skull discovered at Alcoota was from "an undescribed species of crocodile. It belongs to a species that has not yet been given a scientific name, it is distinctly different from its closest relatives".

He said crocodiles today are from a "completely different branch of the crocodile family tree".

The new, extinct species had a number of anatomical differences from other crocodiles.

"It is the most heavily robust member of the genus Baru. It has particularly large teeth… so it has a lower number of teeth," Dr Yates said.

"This was a crocodile that was attacking big prey. Big megafauna."

The Baru is part of an exhibit at the Museum and Art Gallery of the Northern Territory and the new species was first reported by ABC News. The 2009 skull is not part of the exhibit but there is a reconstructed, 3D-printed skeleton of the crocodile on display.

Dr Yates said there were a number of reasons why the find was just now coming to light.

"At the time of discovery it wasn't recognised that it was a different kind of Baru, it was thought to be one of the Baru we already know about."

Preparing a fossil like this one also takes a long time to clean up and repair.

"When they come out of the ground they are caked in dirt… we have to pour lots of glue to get it to hold together in one piece otherwise they would fall apart. I wanted to take that preparation slowly.

"This is something special," he said.