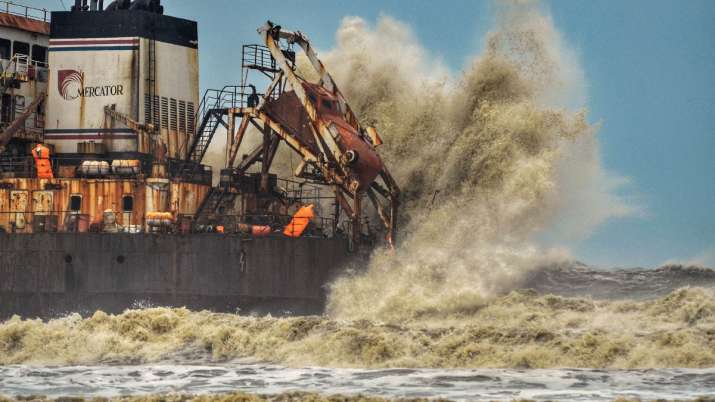 Cyclone Tauktae - an 'extremely severe cyclonic storm' - is "very likely" to reach the Gujarat coast on Monday evening and make landfall in Bhavnagar district between 8 pm and 11 pm, with winds up to 165 km per hour. At 5.30 am it was 160 km from Mumbai.

Around 25,000 people have been evacuated from low-lying areas between Porbandar and Mahuva in Gujarat's Bhavnagar district. Overall more than 1.5 lakh have been shifted across the state. Officials are bracing for very heavy rainfall and winds of up to 190 km per hour. Warnings are also in place in Junagarh, Gir Somnath and Amreli.

Massive damage is expected in Porbandar, Amreli, Junagarh, Gir Somnath and coastal Ahmedabad districts, including destruction of houses. Officials have warned of damage to power and communication lines. Flooding of roads and disruption to railway lines and signaling systems is expected. Damage is expected to salt pans and standing crops.

Mumbai experienced light rainfall and gusty winds early Monday. The airport has been closed till 2 pm. The city's Bandra-Worli sea link has been closed. Five temporary shelters have been set up in each of the city's 24 wards. Three NDRF teams are on alert. Moderate to intense spells of rain in the city as well as Thane, Raigad, Palghar and Ratnagiri districts, are likely in the next few hours.

On Monday morning news agency ANI said nearly 7,000 fishing boats - around 2,200 from Gujarat and 4,500 from Maharashtra had been safely returned to their harbours. In addition over 300 merchant ships have been alerted or re-routed and oil rig operators in the area have been warned.

According to National Disaster Response Force head SN Pradhan, the number of NDRF teams has been increased to 101 - of which 65 have been pre-deployed. Quick response medical teams and public health teams, with stocks of emergency medicines, have also been deployed.

Gujarat Chief Minister Vijay Rupani, who has urged people to stay indoors as far as possible, has also asked officials to ensure electricity supply to COVID-19 hospitals and other medical facilities. Gujarat is among the states worst hit by the second Covid wave; the state has over 1.11 lakh active cases.

Maharashtra Chief Minister Uddhav Thackeray's office said the state - the worst-affected by the pandemic with nearly five lakh active cases - would ensure power and oxygen for hospitals and that patients undergoing treatment at Covid and non-Covid facilities in coastal areas had been relocated.

On Sunday Tauktae triggered gale-force winds, heavy rainfall and high tidal waves along the Karnataka, Kerala and Goa coasts, killing at least six people. It also forced the evacuation of lakhs from coastal areas of affected states and damaged thousands of houses, as well as roads and power lines.

In Goa the major impact was felt in Bardez in North Goa and Mormugao in South Goa. There was temporary power disruption at the Goa Medical College and Hospital, where COVID-19 patients are being treated.

In Karnataka, nearly 100 villages in seven districts, including Dakshina Kannada, Kodagu and Hassan, were affected. Over 200 houses and around 500 electricity poles were damaged. In Kerala at least nine districts were severely affected by sea incursion. Deaths were also reported from Tamil Nadu.