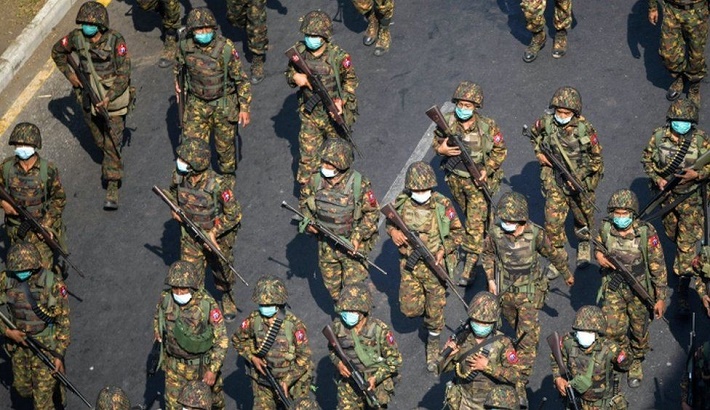 Myanmar's military has entered a small town in western Chin state which took up arms against them three weeks ago.

Activists from the volunteer Chinland Defence Force say they have retreated from Mindat to spare the town further bombardment.

Mindat is one of several towns where opponents of the military have armed themselves.

Nearly 800 people have died in the unarmed protests at February's coup which ousted the elected government.

For three weeks they have been fighting against local people armed with homemade hunting guns, and dozens of soldiers are reported to have been killed.

The rebels said six of their fighters had died.

Some of the population of Mindat is believed to have fled into the surrounding forests. Others remain trapped in the town.

The army was forced to use helicopters to bring in troop reinforcements, as at least three of its road convoys were ambushed.

Local residents in Mindat set up what they called a People's Administration Team, stating that they did not recognise the authority of the military government.

Earlier this week the government declared martial law in the town.

Myanmar's military has justified the February takeover by alleging there had been widespread fraud during a general election late last year which had returned elected leader Aung San Suu Kyi and her National League for Democracy party (NLD) to power.