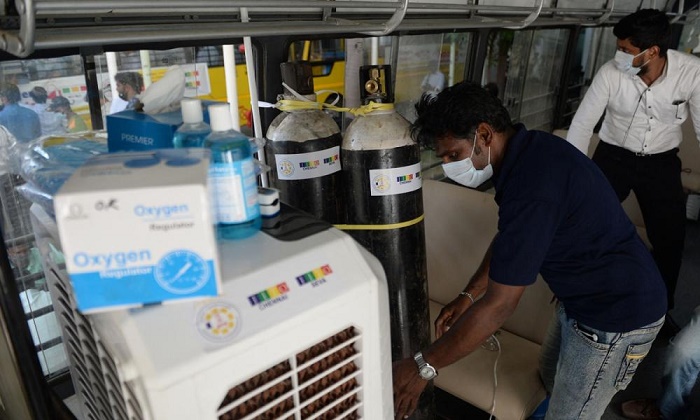 Ιt is a matter of life and death, but China is choosing to make profits at the cost of people’s lives. Not only have Chinese companies indulged in surge pricing with an increase in demand, they are now sending sub-standard Covid-19 related critical equipment to India, according to indiatoday.in

India Today has accessed documents and photographic proof to show how the companies have not only jacked up prices but also altered specifications and components used in making the oxygen concentrators for India, compromising on the quality and life cycle of the machine, which could lead to a medical catastrophe in India.

Different companies are quoting separate prices for the 5-litre and 10-litre concentrators. While the rates vary, most show an increase in the cost in the past weeks. This even as Beijing has been trying to portray the exports as a “humanitarian” gesture.

“Chinese companies carry forward the spirit of humanitarianism, focus on saving lives, respond to the wants and needs of the Indian people. That reveals their social responsibilities as well as the goodwill in helping India fight #Covid-19. Thumbs-up for what they have done,” Chinese envoy to India Ambassador Sun Weidong had tweeted applauding the relief efforts.

But, in reality, if you look at the invoices of one of the manufacturers, Yuwell, the prices stood at $340 per piece on April 30. Weeks later, the cost of each container went up to $460 (as of May 12).

All these procurements are primarily by companies that are donating to India, but there has been no concession whatsoever.

The USISPF (US-India Strategic Partnership Forum) alone has pledged 1 lakh oxygen concentrators to India as part of the Covid relief assistance. The majority of the equipment is being procured from China.

‘Increase in Prices, Decrease in Quality’

Indian businessmen speaking to India Today, on condition of anonymity, said the sudden rise in demand which was unplanned for the manufacturing industry led to an “increase in prices and decrease in quality”.

The increase in price is nearly three times the actual rate of the product in many cases.

One of the businessmen, helping in the procurement of these concentrators for NGOs in India, told India Today that this increase in price is “not due to the increasing cost of raw materials but because of limited supply. Most of the raw material suppliers and factories are making the most of it, leading to many buyers offering higher prices.”

India Today also accessed a conversation where booked orders were cancelled and the manufacturers quoted a higher price for the old order.

“Many factories booked orders in April and took initial deposits but did not deliver the products. Just after labour holidays they started to ask for higher prices for the previously booked orders,” said one of the Indian buyers.

The buyer further added, “Some companies like Zhengzhou Olive, Shenzhen Hongxinyuan Electronics, Guangzhou Ogwel, Yobekan Shenzhen, Longfian Scitech Co to name a few even doubled and tripled cost of the April orders or refused to give delivery and also delayed refunding the deposits.”

There are major quality issues with new supplies. According to Indian buyers in China, they have rejected many consignments after finding out that the components that were used were cheaper alternatives to what was originally used.

This could severely compromise the safety of people whose lives are already in danger in India, explained one of the Indian buyers, and added that there are no quality checks of the products since the situation is desperate.

“But, we are buying way more expensive products for half its quality and the life span will by only a few hundred hours as opposed to a few thousand hours that it originally is meant to be,” said the buyer.

He explained, “As the demand was not forecast, the main components like medical compressors, molecular sieve, PCBA, outer shell, compressor cooling coils, etc, went out of stock. The assembling factories then started using non-medical grade components in the oxygen generators (as explained in the chart).”

Compressors that are being used in the latest orders are under capacity and not medical grade. The 10-litre pieces need 1bar pressure which only a 750 W or 550W compressor can do. But, the new pieces have been installed with normal compressors.

“Both India and Chinese governments should take joint initiative to fight against the pandemic as we are neighbours and have a long history of brotherhood that we must acknowledge. Both must try and control the situation for the benefit of mankind. Joint efforts should be made to stop some people who try to benefit from the pandemic,” Indian businessman Vishal Chada told India Today from Shenzhen in China

India has lodged a strong protest with China regarding the “price hike” by Chinese suppliers. Talking to the South China Morning Post, India’s Consul General in Hong Kong, Priyanka Chauhan, took up the matter with the Chinese authorities.

India has demanded China stop the increase in the prices of medical items. India has expressed hope that amid the surge in coronavirus cases in the country, China will rein in the price of products to be purchased to combat the disease.

Indian diplomat Priyanka Chauhan said, “Our expectation is that the supply chain should remain open and the price of the products should also be stable.”

She added, “Even though there is pressure on supply and demand, there should be stability in the prices of products. The prices of the products should also be forecast.”

Regarding Chinese businessmen, she said, "I do not know how much influence the Chinese government can have in this case, but if they can do it, it would be welcome.”