DGHS urges holidaymakers to return to Dhaka after 14 days 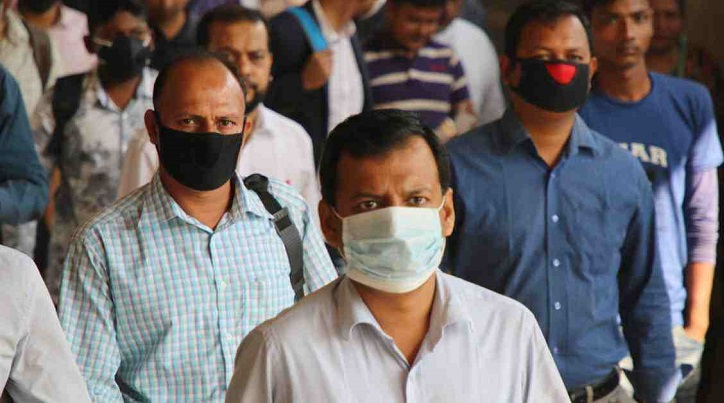 The Directorate General of Health Services (DGHS) on Sunday urged the Eid holidaymakers to return to the capital after 7-14 days if they do not have any urgency as there is a need to check mass gatherings.

Speaking at a virtual press briefing, DGHS spokesperson Dr Nazmul Islam also issued a warning that there is no room for complacency in the declining trend in infection rate since Bangladesh is still in the middle of the second wave of Covid-19.

“The government advised us not to leave our respective dwellings (in cities) and stay there during this Eid. But we’ve seen, a large number of people went back to their village homes in various ways ignoring the advice,” he said.

Dr Nazmul said, “We humbly request those who’ve gone home to return at least 7-14 days later if their offices are not yet reopened and if they don’t face any losses for being late.”

Besides, he said, those who have Covid symptoms must undergo RT-PCR tests at the nearest health complexes or district sadar, specialised or medical college hospitals.

The DGHS official said they also must maintain cent percent health safety rules during their way back to the capital.

He said the government is sending them to institutional quarantine those who are returning from India through different land ports. “We’re getting help from law enforcers and local administrations in this regard. Even though, we’ve seen many of the returnee patients and their attendants are trying to either flee the institutional quarantines or evade the quarantines to rush back to their homes. It’s not logical behaviour as if anyone flees quarantines with the Indian variant as it may harm the entire nation.”

Nazmul said those returning from India should not avoid the institutional quarantine breaking the law. “Don't risk the lives of others by doing so. We should not harm our country knowingly.”

Replying to a question, he said, “We’re regularly checking those returnees who have symptoms…We’ve identified the Indian variant through the genome sequencing of the positive samples of the returnees. Those identified with the Indian variant, we kept them in quarantine strictly and allowed them to return home after they have recovered.”

Nazmul said six people have so far been identified with the Indian variant and five of them have already recovered fully from the virus. “We didn’t find any infected patients in those who came in contact with the positive cases.”

The DGHS spokesman said the lowest number of patients was detected on Saturday as the sample collection was low.

“We think it may happen due to the Eid holidays. We’ve no reason to be complacent about such a small number of infections. We’ll be able to heave a sigh of relief if we see such a small number of cases day after day continuously. Unless it happens, we’ve to keep it in mind that we’re still in the middle of the second wave. We’ve not yet gotten rid of the second wave. So, we all should remain alert.”

He said genome sequencing tests are being carried out at 20-26 laboratories every day to know the prevalence of different Covid variants in the country.

Nazmul said it is now important to conduct tests as much as possible and encourage people to go under the Covid tests. “The more tests we can conduct, the more cases will be detected. The more cases we can identify, the more we’ll have the opportunity to do genome sequencing. It’ll help us to know the existence of new variants and work out what is necessary to do.”

He said the infection rate was between 10-8 percent over the last week though it was very low on Saturday. “So, we’ve no reason to be very satisfied.”

Only 261 Covid cases were reported on Saturday after examining 3,758 samples.

He said there are adequate oxygen cylinders, high-flow nasal cannula and oxygen concentrators in hospitals across the country. “As per the statistics we’ve now, there’re more empty beds than the admitted patients.”

In Dhaka city, Nazmul said there are 3,440 beds in government hospitals and 2,785 of them now remain empty.

Besides, he said, 1,663 out of 1801 beds in private hospitals are now available for Covid patients. “The same way, isolation beds are also empty. “But if we don’t change our behaviour and ignore the health safety rules, we may see the opposite scenario.”