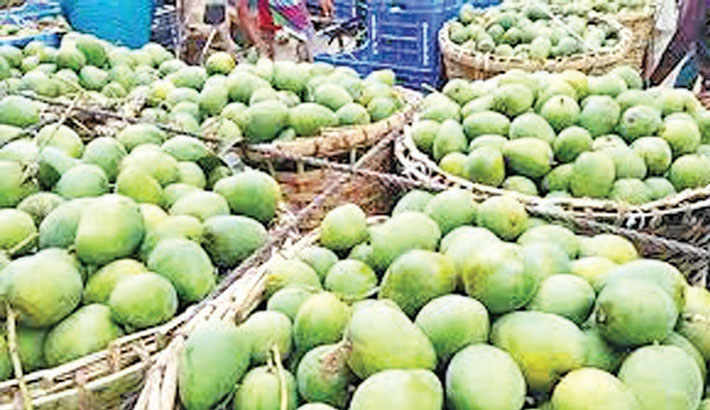 Juicy and delicious fruit Mango has started appearing in the markets of Rajshahi city and its adjacent areas as its harvesting began since Saturday morning abiding by the instruction of local administration amid the Covid-19 pandemic.

Like the previous years, some of the indigenous varieties have appeared in the markets as farmers and traders have started harvesting mangoes since the morning following the instruction of local administration.

According to the administrative decision, the farmers can pluck local varieties from May 15 while harvesting of Gopal Bhog mangoes will commence on May 20 and Laxmanbhog, Laukhna and Ranipasand varieties will start on May 25.

Abdul Awal, deputy director of Department of Agriculture Extension (DAE), told BSS that most of the mangoes will mature and ripen within the stipulated time and then those could be harvested normally.

He said some of the indigenous varieties of mangoes have already ripened. But the other delicious and famous varieties- -Gopalbhog, Khirshapat and Langra– need some more days to be ripened.

District administration is closely monitoring the harvesting of mangoes in addition to extend all necessary facilities to the farmers and traders for harvesting and marketing of the seasonal fruits.

Deputy Commissioner Abdul Jalil urged all concerned to follow the time-frame of mango harvesting for the sake of public interests.

Officials said mangoes have been cultivated on 26,150 hectares of areas in Rajshahi and Chapainawabganj districts where it’s expected to yield 2,44,000 tonnes of mangoes this year.

Meanwhile, Rajshahi and Chapainawabganj districts, nationwide famous for mango production, have set the target to export 300 tonnes of mango to different European and Middle East countries during the current harvesting season.

President of Rajshahi Agro Food Producer Society Anwarul Haque said mangoes produced in Rajshahi are being exported to various European and many other countries for the last couple of years, which is good news for Rajshahi people.

He also said mango farming in the fruit-bagging method has gradually been rising here for the last couple of years. If the mango is cultivated through this method there is no need to use pesticide to prevent fruit-fly. As a result, mango remained in poison-free condition.

He said many farmers and value chain actors got the necessary training on best agricultural practices and with that, they started exploring the high-value export markets.

The highest quantity of mango had been exported in 2016. Mango export is almost double profitable than that of selling in local markets. But additional cost and care is needed for preparing the exportable mango as it requires use of modern technologies.