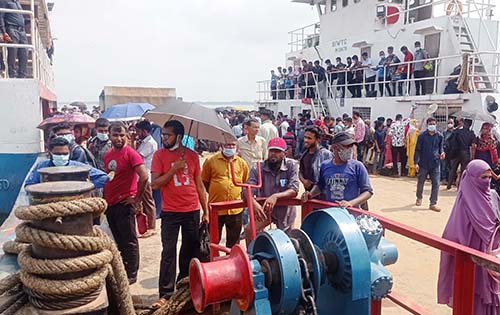 As Eid holidays are over, now thousands of holidaymakers from south-western districts overcrowded the ferry terminals in a bid to return to Dhaka to join their workplaces.

They are flocking to Paturia-Daulatdia and Shimulia-Banglabazar ferry ghats to cross the river and reach the capital as offices reopened on Sunday following a three-day vacation.

The returnees seemed hardly concerned about maintaining hygiene rules although there is an alarming Covid surge in neighbouring India and Nepal.

The detection of a deadlier Indian variant of virus in Bangladesh has also raised serious concerns here in recent days.

UNB Munshiganj correspondent says microbus, cars and auto-rickshaws are charging extra fares from passengers as public transport services remained suspended as part of the government restrictions to stem the transmission of coronavirus.

“People are now returning to Dhaka and adjacent districts through the overcrowded ferries without maintaining social distancing or wearing masks, raising the risks of virus transmission,” he said.

Although 18 ferries are operating, those are not enough to cater to the need for huge passengers. “So, overcrowding is unavoidable.”

UNB Manikganj correspondent reports: Thousands of people from 21 south-western districts started returning to the capital in overcrowded ferries, worrying little about the possibility of virus transmissions.

According to the ferry terminal authorities, 15 ferries, out of 16, are there in operation now as one is out of order.

On Wednesday, five people died in stampede and heatstrokes at Banglabazar ferry terminal amid a mad rush of homebound people ahead of the Eid-ul-Fitr.

Amid surge in infections, the government is going to extend the ongoing lockdown for another week until May 23.

Covid-19 claimed 22 more lives in Bangladesh in the past 24 hours until Saturday morning, which is the lowest daily deaths in the country in nearly two months.

The country saw 26 Covid deaths on Friday and 31 on Thursday.

With the latest deaths logged on Saturday, the official Covid-related death count in the country reached 12,124.

However, the mortality rate remained unchanged at 1.55%, according to the Directorate General of Health Services (DGHS).

The country witnessed a sharp drop in the number of new cases as the tests have declined dramatically.

Only 261 infections were recorded during the 24-hour period after examining 3,758 samples.