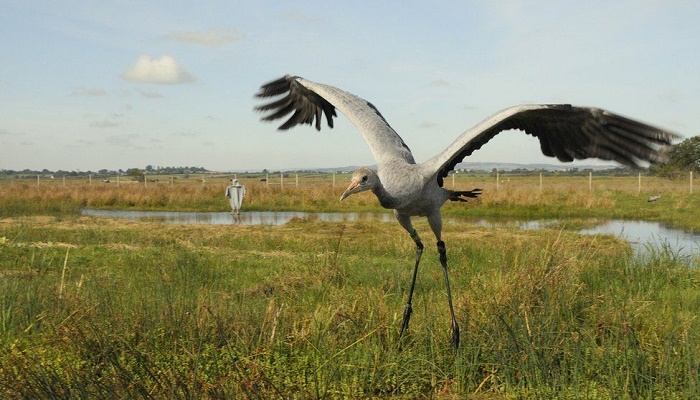 A giant bird that has been part of Irish folklore and was often kept as a pet in medieval times could be returning to the island after an absence of more than 300 years.

A pair of cranes are nesting on a rewetted peat bog in the Republic of Ireland's midlands.

It is hoped they could be the first of the species to breed in Ireland for centuries.

The cranes are on land owned by former peat producer Bord na Móna.

The location is to remain confidential to protect the birds.

In January, Bord na Móna ceased peat harvesting for good and has been rehabilitating thousands of hectares of boglands, rewetting the drained sites.

The company's lead ecologist, Mark McCorry, said the return of the nesting pair of cranes was very significant.

"While we have these birds coming to Ireland during the winter, we generally haven't seen them in the breeding season," he said.

"So last year, when they were discovered, they were the first pair that were in a nest during the breeding season.

"So it's really a great indication that they look like they're ready to re-colonise Ireland again.

"It's a very iconic species in Ireland, it's very associated with folklore as well - there's lots of stories around it."

Mr McCorry said he was "reasonably optimistic" that the birds would successfully breed.

"They failed last year, but they did produce eggs. Obviously we didn't confirm any young, but that's not uncommon for cranes," he said.

"Generally these birds, when they pair up and they're young, it takes them a few years, or a few goes, before they become successful breeders."

However, Mr McCorry said there is also the possibility that the species has already begun to re-establish itself in Ireland, as a juvenile crane was spotted at an estuary in County Dublin last autumn.

"It would be suspected that if it was a juvenile crane, it bred somewhere in Ireland," Mr McCorry said.

"So it's not beyond the bounds of possibility that this pair of cranes are not the only pair now in Ireland.

Adult cranes stand at about 1.2m (4ft) and can have a wingspan of more than 7ft. They are fabled for their complex “display“ behaviour, where they perform bows, pirouettes and bobs.

Once common in Ireland, the destruction of their habitat, being hunted for meat and predators such as foxes saw them become extinct some time between 1600 and 1700.

Niall Hatch, of Birdwatch Ireland, said it would be "wonderful" if the "spectacular species" returned.

"It's the largest bird that most people would ever see in Ireland, it's enormous and it's a real part of our heritage. So it would be lovely to have it back."

Mr Hatch said the draining of bogland had done the most damage to cranes and other species and the restoration work undertaken by Bord na Móna was really important.

"We're hoping that as conditions improve in Ireland perhaps we'll see more of them come back, especially if they do breed and rear chicks," he said.

"The hope would be that those chicks in future years will return and start to breed in the same areas as well and the population might build up."

Having been absent as a breeding bird in Britain for 400 years, there are now an estimated 200 cranes dispersed in Wales, Scotland, the English Fens, Suffolk and Gloucestershire.

Mr Hatch said there had been increasing reports of cranes flying over Ireland and stopping off there, such as a flock of five in Wexford a couple of years ago.

There have also been occasional sightings in Northern Ireland, the most recently recorded being at Lough McNean in Fermanagh in 2016.

RSPB Northern Ireland ecologist Matthew Tickner said lowland bogs and other extensive wetlands would be their favoured habitat, as this is where they like to be undisturbed when breeding.

"We have some of this habitat in Northern Ireland, but not on the same scale as in the Republic," he said.

"So freedom from disturbance might be a constraint if cranes started to appear further north.

"With the population in Britain starting to increase, I imagine we might start to see more of the birds on the island of Ireland over time, so it may depend on what any such wandering pioneers might make of the habitats we have to offer."