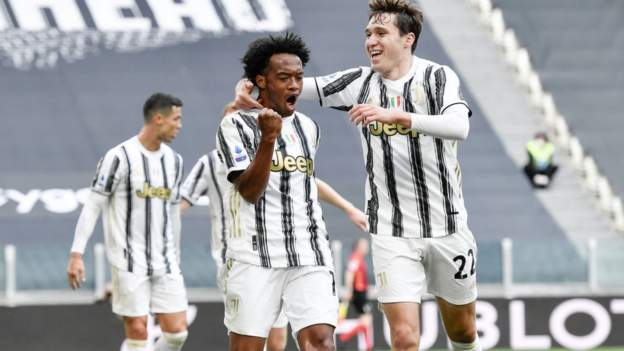 Juan Cuadrado scored a late penalty to keep Juventus' hopes of qualifying for the Champions League alive with a dramatic victory over Inter Milan after playing with 10 men for 35 minutes.

Giorgio Chiellini's own goal to take it to 2-2 was also reviewed by VAR, before Cuadrado won and scored a penalty to put Juve two points above Napoli in Serie A.

Fifth-placed Napoli travel to Fiorentina on Sunday (11:30 BST) and can regain fourth place going into the final matchweek.

Cristiano Ronaldo opened the scoring from the spot for Juve, whose league crown was taken off them by Inter this month.

Romelu Lukaku made it 1-1 at the other end with another penalty before Cuadrado's thumping strike deflected in for Juve's second just before the break.

Chiellini thought he was tugged by Lukaku as he poked in an own goal to make it 2-2 but the referee showed him a yellow card for holding the Belgian following a VAR review.

Just as Juve thought their Champions League qualification hopes had taken a huge blow, Ivan Perisic was deemed to have clipped Cuadrado in the box.

The Colombian stepped up to score the winning penalty before Inter's Brozovic was shown a second yellow for a late challenge on the match-winner.

Champions League qualification remains out of Juventus' hands and their final game of the season is against Bologna on Sunday, 23 May.