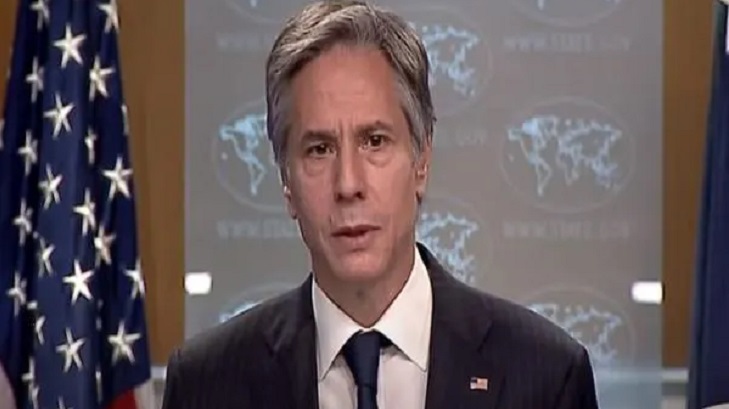 US Secretary of State Antony Blinken while releasing the 2020 International Religious Freedom Report.

The US Department of State on Wednesday (local time) sanctioned a Chinese Communist Party (CCP) official over human rights violations, including the arbitrary detention of a Falun Gong practitioners.

In a statement, US Secretary of State Antony Blinken said: "To that end, today I am announcing the designation of Yu Hui, former Office Director of the so-called "Central Leading Group on Preventing and Dealing with Heretical Religions" of Chengdu, Sichuan Province, pursuant to Section 7031(c) of the Department of State, Foreign Operations, and Related Programs Appropriations Act, 2021."

"He is designated for his involvement in gross violations of human rights, namely the arbitrary detention of Falun Gong practitioners for their spiritual beliefs. Yu Hui and his immediate family members are ineligible for entry into the United States," he added.

Blinken said that the US will continue to consider all appropriate tools to promote accountability for those responsible for human rights violations and abuses in China and elsewhere.

On the same day, the US released its 2020 International Religious Freedom (IRF) report, which provides a detailed and factual account of the status of religious freedom in nearly 200 countries and territories and documents reports of violations and abuses committed by governments, non-state actors, and individuals.

"As this year's IRF report indicates, for many people around the world this right is still out of reach. In fact, according to the Pew Research Center, 56 countries, encompassing a significant majority of the world's people, have high or severe restrictions on religious freedom," said Blinken during a briefing at the State Department, mentioning Myanmar, Iran and China as key violators.

"We will continue to work closely with civil society organisations, including human rights advocates and religious communities, to combat all forms of religiously motivated hatred and discrimination around the world," he further said.

The report covers government policies violating religious belief and practices of groups, religious denominations and individuals, and US policies to promote religious freedom around the world. (ANI)