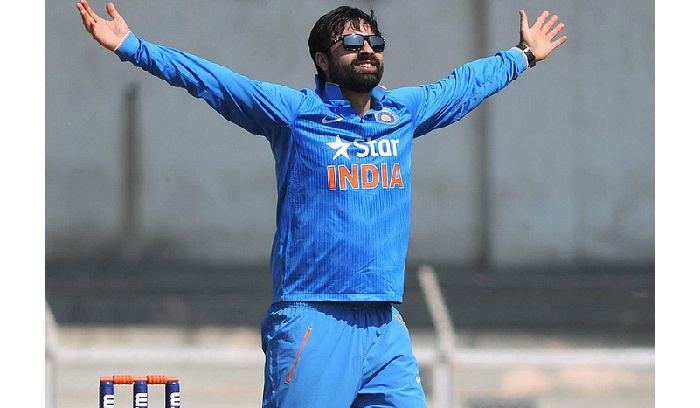 Off-spinning allrounder Parvez Rasool needs no introduction as he is the only player from Kashmir valley who has donned blue jersey by featuring in playing eleven in the year 2014 against Bangladesh. Parvez earlier grabbed the limelight when he amassed 594 runs and claimed 33 wickets while playing for Jammu & Kashmir in the 2012-13 Ranji Trophy. He also made it to the elite cricket league IPL when he was first bought by Pune Warriors (2013), then by Sunrisers Hyderabad for two seasons (2014, 2015) and by Royal Challengers Bangalore (2016). However, since then, the captain of Jammu and Kashmir team has gone unsold and found no takers in any of the auctions. With the pandemic truncating various cricket tournaments across India, players like Parvez are finding it tough to impress selectors. However, Parvez is determined to make a comeback more than ever before. Rising Kashmir’s Misabah Bhat spoke exclusively to JK’s captain about his cricketing journey and how cricketer is preparing for future endeavours.

Q: Talk to us about your childhood days?

A: I belong to Bijbehara town of Anantnag district. The local cricketing scene of Bijbehara is very famous across Kashmir. From childhood, I have only played cricket and I do not remember playing any other game, since in our area only cricket is played. My journey like everyone’s started with tennis ball cricket, locally called cosco ball. At that time you do not think about professional cricket, you are just enjoying the moment. Then I played various inter-schools across varied age groups like U-14, U-19 then Ranji, India-A, India and IPL.

Q: Which IPL teams have you represented?

Q: What were the reactions of your family after they got to know you are interested in cricket?

A: It was normal but maybe that is because I belong to a cricketing family. My father was a cricketer who used to play at district level, my elder brother has played for J&K in Vijay Hazare Trophy and Mushtaq Ali Trophy. There was already a cricketing atmosphere in the family. So, my family has always been supportive towards my passion for the game.

Q: What struggles did you face during your journey?

A: One struggle that I faced was making transition from playing on local pitches to playing on actual cricketing turfs. You see most of the cricket that is played locally is played on mats, so making the transition from mat to turf was a big struggle. Also, we had no idea about trials and how they work, so we started coming to Srinagar, travelling to Srinagar from Bijbehara in buses with heavy kit bags. Everyone struggles and that is what makes us – us.

Q: Why did you choose cricket?

A: The simple answer: I started playing cricket because of seeing my father play the game.

Q: Who is your inspiration?

A: My father. When he used to play, he used to take us to the games on his bicycle and that is where the love of the game blossomed.

Q: Who trained you during your initial years?

A: That would be Mr. Abdul Qayoom also from Bijbehara who has captained J&K Ranji team and has also played for Indian Airlines. And I have learned a lot from my Guru “Bishan Singh Bedi” who is the former India captain. He used to say you can control only those things which are in your hands. The ones which are not in your control you cannot do anything about those things. Your performance is in your control so just give your best. Leave selection and other decisions to the concerned people.

Q: How was your journey in IPL?

A: IPL is every cricketer’s dream; it is the biggest cricketing league in the world. It hosts the best cricketers from various countries, you meet with them, and you share a dressing room with them, which is the most valuable experience of the IPL. One learns a lot from these talented players. In my first year I got a chance to play alongside Yuvraj Singh, Angelo Matthews and I got to learn a lot from them. How they prepare themselves for a game both mentally and physically, how they train. IPL is a great learning experience even if a player does not play any games.

Q: Did you get a fair chance in the IPL?

A: Yes, but being a finger spinner there were only going to be limited chances. It is the wrist spinner’s game at the moment. My only regret is I never got a chance to show my batting talent in IPL, if I had I believe I would have played more games. But I am happy I got a chance to play in IPL and take wickets of greats like Jacques Kallis, Shikhar Dhawan and Yuvraj Singh.

Q: How was your experience playing for India?

A: It was definitely a great experience; it is every sportsperson’s dream to play at the highest level of their sport; to play for their country. It takes a lot of effort and struggle, plus when a cricketer from a smaller place like J&K achieves such a feat it makes it all the more special.

Q: What is your favourite moment?

A: To play for India team in Bangladesh, to get that blue cap from the captain. That moment ranks highest for me.

A: It would be my innings against Services team in Ranji Trophy where I scored 181 runs. While bowling my best innings was taking 7 wickets while playing for Board President's XI against Australia in Chennai.

Q: What do you have to say about the JKCA scam?

A: It is a very unfortunate thing, for the past 50 years we have not done anything for cricket in J&K. We were not able to construct a new stadium orbuild infrastructure for younger generation. It was the worst thing to happen in J&K’s cricketing history. When we read about it all in the news, everyone associated with the game was very sad. The money allocated for developing talent among kids, to improve infrastructure; which would have led to producing talented cricketers; was just wasted away. If we talk about infrastructure here it is next to nothing. J&K cricket got affiliation before Himachal Pradesh (HP), but if we compare the infrastructure here and there, we are zero. We were not able to construct one more cricketing ground here, whereas in HP they have a ground in every district.

Q: What about the transparency in the selection process?

A: It is very transparent at least since last couple of years, we have selectors out of Maharashtra who have been good cricketers. We recently had few selection matches and whosoever performed well in those games was selected on their merit.

Q: What are you doing presently?

A: Right now, I am working on making a comeback. If you look at my past performances, I do believe I should have gotten a chance in the IPL. But that is something which is out of my hands, the only thing that I can do is perform and that I will keep doing. I am working on my fitness and preparing myself for the next innings. Plus, I am also working with the Sports Council, working with the next generation of cricketers.

Q: What would be your message for the youth?

A: Cricket is one of the best games and there are a lot of opportunities around but only if you work hard, be professional and have a positive mindset.