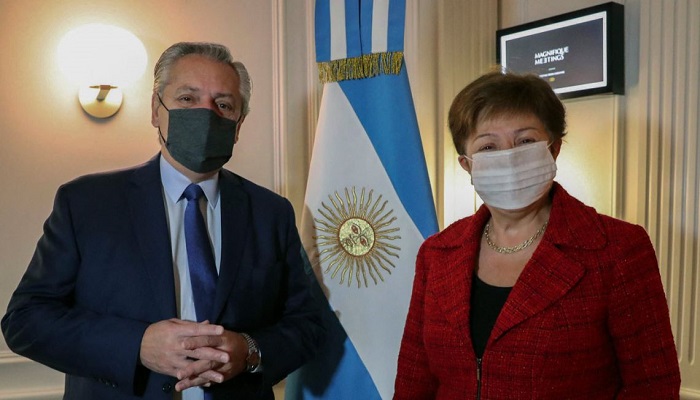 Argentina’s President Alberto Fernandez said Friday he was hoping to renegotiate his country’s debt “as quickly as possible”, after talks with the head of the International Monetary Fund (IMF) in Rome.

Fernandez told reporters it had been a “very constructive” and “very frank meeting, where we expressed our will to resolve the problem of Argentine debt”.

He said he wanted to “find an agreement as quickly as possible”, while adding: “We cannot think about an agreement which demands more efforts from the Argentine people.”

For her part, IMF managing director Kristalina Georgieva said it was a “very positive meeting” where they discussed the “deep social and economic challenges” facing Argentina that have been aggravated by the pandemic.

She said they committed to keep working together “on an IMF-supported programme that can help Argentina and its people overcome these challenges, by strengthening economic stability, protecting the most vulnerable and setting the basis for more sustainable and inclusive growth”.

“I also took note of President Fernandez’s request for a reform of the IMF’s surcharges policy,” she said in a statement.

The IMF says it imposes surcharges on some debtors to create an incentive for nations to exit its lending programmes as quickly as possible.

Argentina is looking to replace a lending programme signed by the previous government in 2018 under which it currently owes the IMF about $45 billion.

In recession since 2018, the former Spanish colony must also repay a $2.8 billion loan with the Paris Club of creditor countries that provide sustainable solutions to debtor countries.

Fernandez this week visited Portugal, France and Spain before heading to Italy, where he also met with Argentine Pope Francis.