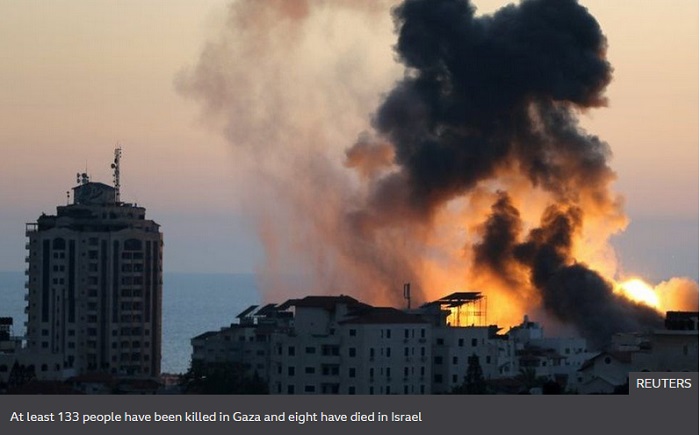 A US envoy has arrived in Tel Aviv for de-escalation talks as unrest between Israel and the Palestinians continues.

Hady Amr will take part in talks with Israeli, Palestinian and UN officials and reinforce what US diplomats said was the need for a "sustainable calm".

Israeli air strikes on targets in the Gaza Strip killed 10 people on Saturday, while Palestinian militants there fired rockets into Israel.

This week's violence in Gaza and Israel is the worst since 2014.

It came after weeks of spiralling Israeli-Palestinian tension in East Jerusalem which culminated in clashes at a holy site revered by both Muslims and Jews. Hamas - the militant Islamist group which rules Gaza - began firing rockets after warning Israel to withdraw from the site, triggering retaliatory air strikes.

At least 133 people have been killed in Gaza and eight have died in Israel since the fighting began.

Saturday is the day when Palestinians commemorate what they call al-Nakba, the Catastrophe. It marks the day after the anniversary of Israel's independence in 1948, when hundreds of thousands of Palestinians fled their homes or were displaced.

What is the US envoy seeking to achieve?

Mr Amr's arrival comes ahead of a UN Security Council meeting on Sunday. The US embassy in Israel said the aim of his trip was to "reinforce the need to work toward a sustainable calm".

But appeals to Israeli and Palestinian leaders have so far failed to produce a ceasefire agreement.

Israel's air strikes on Hamas in Gaza have forced the Middle East on to US President Joe Biden's agenda. His administration has had to rapidly step up its game on the diplomatic front without a full team in place: there is not even a nominee yet for ambassador to Israel.

Mr Amr is a mid-level diplomat without the kind of rank held by special envoys in previous US administrations, the BBC's Barbara Plett Usher says.