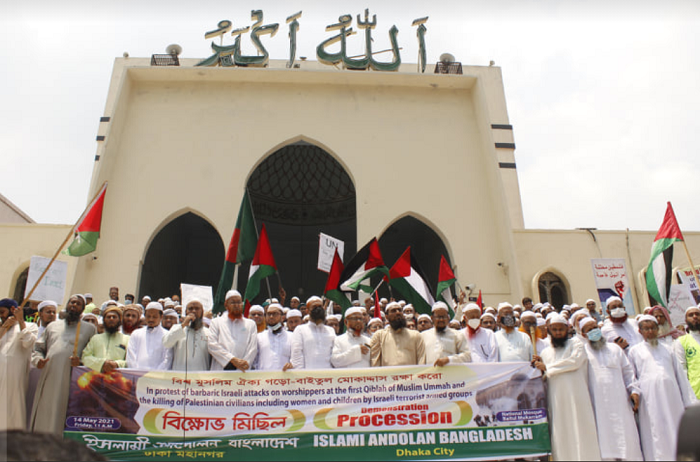 Thousands of Muslims led by activists from an Islamic political party demonstrated in Bangladesh’s capital on Friday to denounce attacks by Israel against Palestinians.

After the end of Eid a—Fitr prayers at Dhaka’s main Baitul Mokarram Mosque, activists from the Islamic Andolan Bangladesh, or Islamic Movement Bangladesh, began protesting and were joined by thousands of others.

Muslim-majority Bangladesh celebrated the key festival of Eid a—Fitr in a subdued manner after the government urged people to avoid large gatherings. Authorities arranged prayers in phases at the Baitul Mokarram Mosque, where devotees maintained distancing to avoid spreading the coronavirus.

The current eruption of violence between Israelis and Palestinians began a month ago in Jerusalem. Israel regards all of Jerusalem as its capital, while the Palestinians want east Jerusalem, which includes sites sacred to Jews, Christians and Muslims, to be the capital of a future Palestinian state.

On Friday, Israeli artillery pounded northern Gaza, the military said. Israel has massed troops along the border following days of fighting with the Islamic militant group Hamas, which controls Gaza. Palestinian militants have fired some 1,800 rockets and the military has launched more than 600 airstrikes. The stepped-up fighting came as communal violence in Israel erupted for a fourth night.

Bangladesh is one of 28 members of the United Nations that does not recognize the state of Israel.

In a letter to Palestinian President Mahmoud Abbas, Hasina said the threatened eviction of dozens of Palestinians from the Sheikh Jarrah neighborhood of East Jerusalem was a severe violation of human rights and international law.

“We unequivocally denounce such acts of terror and violence and urge the international community to take sustainable measures to end such kinds of acts anywhere and everywhere in the world including Palestine,” she wrote.