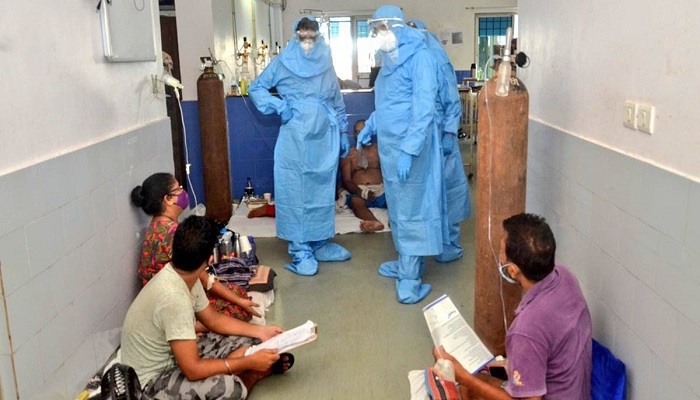 Seventy-four patients have died at the Goa Medical College and Hospital - the biggest Covid facility in the state - in the past four days, all reportedly due to a lack of medical oxygen.

Thirteen people died between 2 am and 6 am today. Early Thursday 15 people died. The day before - Wednesday - 20 people died, and on Tuesday, also between 2 and 6 am, 26 people lost their lives.

Goa Chief Minister Pramod Sawant, who visited the hospital this week, said the gap between the "availability of medical oxygen and its supply might have caused some issues".

The Chief Minister sought a probe by the High Court, which is already hearing petitions on the management of the pandemic. He also stressed that there is no scarcity of oxygen supply in the state.

Mr Sawant's assertion, however, contradicts a Tuesday letter from Goa's Principal Secretary, PK Goel, to the central government. According to news agency PTI, in the letter he said that between May 1 and 10 the state received only 66.74 metric tonnes of the allocated 110 from Maharashtra's Kolhapur

Kolhapur supplies around 40 per cent of all medical oxygen to Goa in this crisis.

"It is an earnest request we should be given 22 MT per day, in place of 11 MT, for at least a week to make up for the shortfall," the BJP government at the state wrote to that at the centre.

Meanwhile, the Goa Medical College and Hospital is full. There is no place for new patients, and the final few who managed admission have to be content with a spot on the floor.

"We waited eight hours just to get a wheelchair... the next day his oxygen levels were 50-60 and we needed a ventilator, which was not available. Forget that, they don't even have beds. They put him on the floor," a family member of a patient, who did not wish to be named.

The Bombay High Court's Goa bench is hearing several petitions on the handling of the pandemic and, on Thursday, said Covid patients could not be allowed to die because of logistics.

That was after the state said delay in replenishing oxygen supplies was due to problems like a lack of people to drive the tankers and tractors that transport the gas.

The court has directed hospital and state authorities to file a status report by 7 pm today; this is to include reports on the supply of oxygen and the availability of tanks, concentrators and drivers.

Goa has the highest positivity rate in the country - 48.1 per cent as of Thursday evening. This means every second COVID-19 test is returning a positive result.