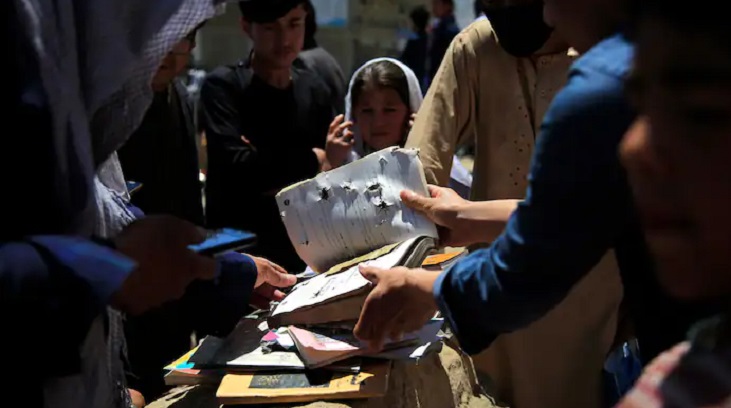 Afghans go through belongings left behind after a deadly bombing on Saturday near a school in Kabul. (Mariam Zuhaib/AP)

A deadly bombing outside a school in one of Kabul’s Hazara neighborhoods is heightening fears within the minority group that they are increasingly vulnerable as international forces withdraw, leaving the Taliban a more formidable political and military force than ever before.

The attack killed more than 85 people, mostly students, as class let out Saturday. And at least 147 were wounded in the blast that left the building’s outer wall pockmarked by shrapnel, according to the Mohammad Hedayt, the spokesman for Vice President Sarwar Danish.

Afghanistan’s Hazara community is frequently targeted by militant groups and was long persecuted by the Taliban. The scale and brutality of Saturday’s attack left many Afghans and the international community stunned. Most of the victims were schoolgirls between 13 and 18 years old.

Distrustful of the government and the Taliban, many of Afghanistan’s minority groups, particularly the Hazaras, viewed the presence of foreign forces as protective. Following the U.S. invasion of Afghanistan, many Hazara militias disbanded, trusting that the new order would bring them safety. But now, as U.S. and NATO troops leave amid rising insecurity in the country, many Hazaras describe feeling abandoned, fearing a return to widespread persecution and an increase in attacks like Saturday’s bombing.

Mukhtar Alizada’s younger sister Nekbakht was one of the students killed. Grief-stricken, he described Nekbakht’s infectious devotion to her studies. He said the 18-year-old would encourage her siblings to finish their homework and never to miss class.

“She would tell us we don’t have to be poor like our parents; we don’t have to be illiterate,” he said. Nekbakht attended supplementary classes early in the morning before her afternoon classes at Syed Al-Shahda school. Between her studies, she would help her mother and sisters weave carpets at home to supplement her father’s income as a day laborer.

“She had big dreams,” her mother, Rahila Hydari, said.

The withdrawal of U.S. and NATO forces has brought with it an uptick in violence across Afghanistan. Taliban attacks have hit small outposts around vulnerable government-held towns and cities, but Saturday’s was one of the deadliest large-scale bombings targeting civilians in Kabul in months.

No group has claimed responsibility for the attack. The Taliban denied any involvement, but Afghan President Ashraf Ghani blamed the militants for the bombing, citing it as proof that they do not want a peaceful settlement to the conflict. Other experts warn that the more instability created in Afghanistan because of the withdrawal of foreign forces, the easier it will be for other militant groups such as the Islamic State to grow in strength.

An intense diplomatic push was launched earlier this year to reach a peace deal between the Taliban and the Afghan government to avoid the wave of violence now sweeping Afghanistan. The United States pressured the two sides to agree to a deal that included a cease-fire, but it was unsuccessful.

Negotiations are ongoing. “This is a pivotal moment for the Taliban and Afghan leadership to come together and take responsibility for the future of their country,” the U.S. State Department said in a statement.

“We will do all we can to galvanize and support the diplomatic process. That includes negotiations between Afghan leaders and the Taliban and the meaningful participation and inclusion of women, minorities and civil society,” the statement said.

Despite the risks, Nekbakht’s parents intend to send their other daughters back to Syed Al-Shahda once it reopens. They cannot afford to move to another neighborhood, and they say education is the only way they can ensure their children will have a better life and perhaps be able to flee Afghanistan one day.

“I want my children to be teachers or doctors so they can leave this country,” said Hydari, Nekbakht’s mother. Alizada, her brother, conceded, “now that the U.S. troops are leaving, we fear the situation for Hazaras may get even worse.”

Along with Afghan journalists and civil society activists whom the Taliban has threatened, many Hazaras are also attempting to flee.

Jawad Zawulistani, a 28-year-old Hazara working for a local human rights NGO, said he refuses to abandon his home country, but many of his friends are leaving or trying to plot an exit.

“The conversations are very painful; it’s sad for me to see them go,” he said, explaining that he can understand why they want to seek security and better work opportunities elsewhere.

“But if we leave our country, we are creating a vacuum for the extremists,” he said. “That’s why I am determined to stay.”