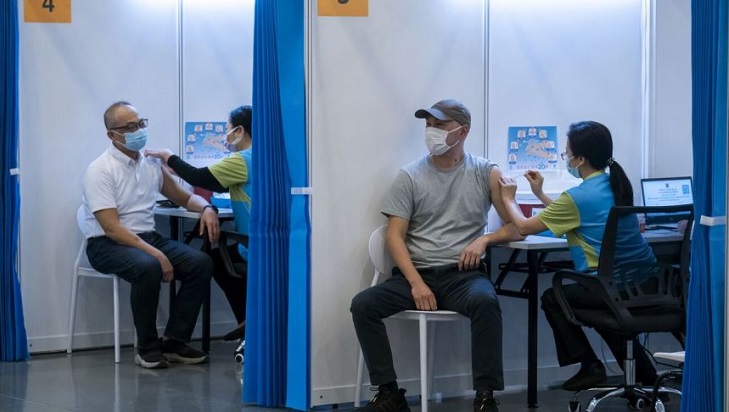 People receive a dose of China's Sinovac vaccine at a community vaccination centre in Hong Kong on February 23, 2021.PHOTO: AFP

There are few places in the world easier to get a Covid-19 vaccine than Hong Kong.

Shots are free and available to everyone over the age of 16. Bookings are made via an easy-to-use government website and people can be in and out of the 29 vaccination centres dotted throughout the city in 20 minutes.

They even get a choice between two shots - a Chinese-made one from Sinovac Biotech Ltd, or the Pfizer-BioNTech vaccine that's the most effective in the world.

Most people, however, are choosing not to get vaccinated.

According to Bloomberg data, enough doses have been administered to cover 11.6 per cent of a population of 7.5 million since late February.

That’s behind leading places like the UK, at 39.7 per cent and Singapore at 19.4 per cent, where available doses are so in demand that most of the adult population has not yet been granted access.

In Hong Kong, so many shots are languishing that the government has warned people that some will expire in September.

On Sunday (May 9), vaccine appointment bookings dropped to their lowest in a month, with just 2,100 taking the Sinovac shot and 6,800 receiving the BioNTech jab.

The situation is making Hong Kong a conspicuous global outlier. While other developed economies with strong vaccine supplies such as Germany, the UK or the US see vaccine reluctance as a challenge to overcome later in their inoculation drives, Hong Kong has faced scepticism from the start, fuelled by a breakdown of communication between the unpopular, unelected government and population.

The slow uptake is likely to further delay the city's return to normalcy, and undermine its attractiveness as a business hub amid signs of an exodus of expatriates and locals alike.

Vaccine reluctance has been generally higher in the Asia-Pacific region, where early containment success has meant that people don't fear Covid-19 as much.

Hong Kong has seen less than 12,000 cases and 210 deaths since the pandemic began, while peers like Taiwan, Singapore, New Zealand and Australia have been similarly less-affected by the pandemic.

What makes the dynamic harder to resolve in Hong Kong is a deeper well of mistrust stemming from unprecedented street protests in 2019 as well as a subsequent crackdown by Beijing and local authorities that has eroded key political freedoms.

With political distrust permeating through every sphere of Hong Kong life, some see a refusal to heed government calls to take the vaccine as a form of resistance - particularly as Covid-19 restrictions and the national security law means forms of dissent have mostly been snuffed out.

"I won't take the vaccine, because my friends and I just don't want to follow any instructions or recommendations from the government," said a 16-year-old student who gave her surname as Chau. "I don't trust anything from them. We'll do our best to resist and fight against the government in the way we still can."

In the city, getting a shot is convenient but there's high complacency due to the perception that Covid-19 doesn't present a significant health threat to residents. Yet where the population stands out is in confidence - or the lack of it, she said.

With the level of distrust in government "more severe" in Hong Kong than many other places due to the events of the last few years, people are more prone not just to vaccine scepticism, but conspiratorial readings of any public health initiative linked to the government, she said.

Media reporting is one way this unfolds, she said. In Hong Kong, medical incidents or deaths among people after they get vaccinated are widely reported, though some have very little link to the shot.

In one example, a 41-year-old man died this month five days after an accident where a barbell fell on his chest in a gym during a workout, with media reports adding that he had taken the BioNTech vaccine earlier.

Overall, 16 people have died after taking the Sinovac shot, though the government said none have been linked to the vaccine.

That's contributed to the distrust of vaccines, despite overwhelming scientific evidence in Hong Kong and globally showing their safety.

Selene Yau, a 24-year-old marketing professional, said that news of the deaths and side effects are scaring people regardless of their politics.

"My relatives and I have different political views, but we still want to wait and see. There is a lot of news about the adverse reactions spreading on social media and WhatsApp groups," said Yau.

The febrile atmosphere also puts pressure on government officials to act cautiously in ways that have then further raised resistance. One example was an abrupt 12-day suspension of the BioNTech vaccine in March after healthcare workers reported packaging defects like "loose lids" and "stains" to the government and company.

"In other places it may not have risen to what it rose to in Hong Kong," said Ben Cowling, head of the University of Hong Kong's department of epidemiology and biostatistics, noting that the BioNTech factory that manufactured those shots had also sent doses to many other places around the world without issue.

The Hong Kong government said in a statement that a number of officials have "led by example by getting vaccinated," and added that it would "go public to clarify misinformation and misconception about the safety and benefit of taking vaccines."

To stoke interest in vaccinations, the Hong Kong government has relaxed social distancing rules for vaccinated people, allowing them to visit bars and gather in bigger groups at restaurants. A travel bubble with Singapore scheduled for the end of the month will also only be opened to vaccinated Hong Kong residents.

Those measures haven't boosted vaccination takeup significantly. After an initial one-day bounce, bookings have stayed flat for both types of vaccines.

On Friday, the government announced that vaccinated people would also be subject to shorter periods of quarantine if they're found to be close contacts of infected people or are travelling from a handful of low to medium risk places.

While experts say even stronger incentives are needed, a government adviser suggested the Hong Kong atmosphere of distrust limits their policy options.

"Since the trust level is not high, so we can't push it like mainland China or elsewhere, so we must do it in a voluntary basis and every individual must decide for themselves," said Lam Ching Choi, a doctor and adviser to the chief executive. "It's a very delicate position for the government."

The government is now reaching out to local celebrities to convince people to get vaccinated. Secretary for the Civil Service Patrick Nip publicly thanked Hong Kong billionaire Li Ka-Shing for publicising on his foundation's Facebook page that he received a BioNTech shot and asking others to do so too.

Still, much of the population looks set to dig their heels in - even frontline medical workers at risk of being infected.

Hanson Chan works as a nurse at a public hospital that handles Covid-19 patients. Vaccine development was rushed and the prospect of rare side effects worries him, he said.

"The government keeps saying those cases of abnormal side effects have no clinical evidence to indicate that they are caused by the vaccine - that may be a fact," Chan said. "However it's not convincing enough for residents to believe this argument from the government's mouth."