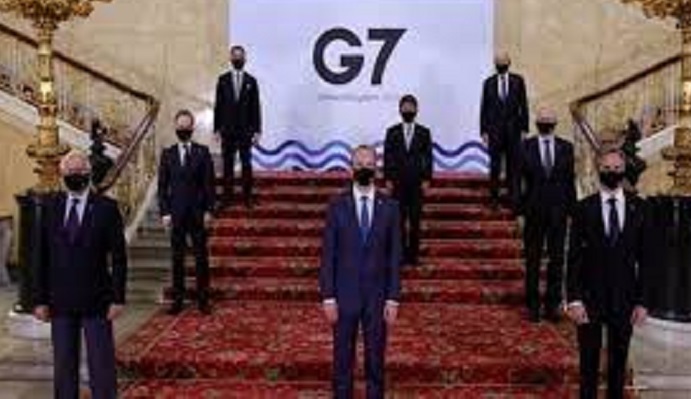 Foreign ministers of the Group of Seven (G7) countries that criticised Beijing’s increasing presence in the East and South China seas. It responded them very sharply against the joint communique.

In a joint statement released on Wednesday in London, representatives from the G7, which includes Canada, France, Germany, Italy, Japan, the United Kingdom and the United States, had condemned Chinese actions in East and South China seas.

Wang denounced the G7 nations in a news conference, saying their move is an interference in China’s sovereignty and runs counter to the current trend of peaceful development and cooperation.

Wang also reiterated China’s stance on its territorial claims in the East and South China seas, saying they are based on legal grounds, reported NHK World.

He said that Taiwan’s participation in international organisations, including the WHO, must be handled in accordance with the “one-China” principle.

Taiwan’s foreign ministry said the G7’s unanimous support is especially meaningful ahead of the WHO’s annual assembly scheduled for later this month.

Ministry officials said Taiwan will keep deepening its cooperation with G7 member countries in order to contribute to global health and people’s well-being, as well as peace, stability, and prosperity of the Indo-Pacific region, reported NHK World.

Beijing claims full sovereignty over Taiwan, a democracy of almost 24 million people located off the south-eastern coast of mainland China, despite the fact that the two sides have been governed separately for more than seven decades.

Taipei, on the other hand, has countered the Chinese aggression by increasing strategic ties with democracies including the US, which has been repeatedly opposed by Beijing. China has threatened that “Taiwan’s independence” means war.

In the communique, G7 Foreign Ministers voiced their opposition to any unilateral actions that could undermine the international rules-based order regarding Chinese aggression in East and South China Seas.

They also expressed concern about alleged human rights violations and abuses in the Xinjiang Uygur Autonomous Region and other areas, reported NHK World.