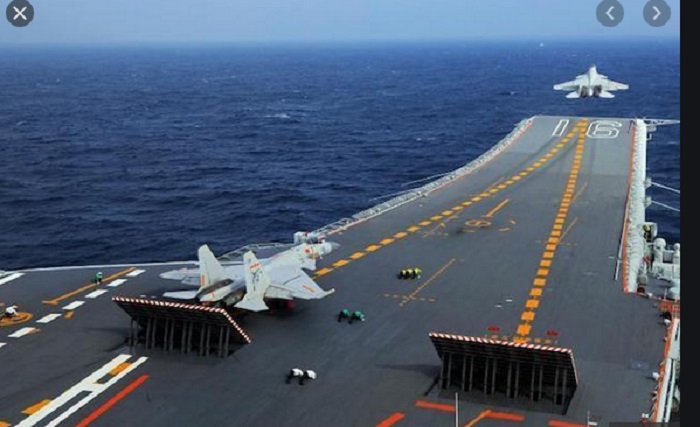 China is eyeing the World War II-era airstrip in the archipelago of Kiribati, deep in the Pacific, positioned just 1,800 miles from Hawaii.

Dave Makichuk, writing in Asia Times said that the two nations re-established ties two years ago and have embarked on new cooperation projects, including infrastructure investment as well as trade and cultural exchanges.

This could give Beijing an airbase in an incredibly strategic location, between North America and New Zealand, potentially giving China's military much greater reach throughout a critical and increasingly tense region, The War Zone reported.

An UK based news agency first reported on Chinese developments in Kiribati, which also included improvements to a bridge associated with the airstrip, on May 5, 2021, based on information from I-Kiribati politician Tessie Lambourne.

"The government hasn't shared the cost and other details other than it's a feasibility study for the rehabilitation of the runway and bridge," Lambourne, who formed the Boutokaan Kiribati Moa Party last year, which is in opposition to President Taneti Maamau's Tobwaan Kiribati Party, told the UK news agency.

The site -- on the island of Kanton, also spelled Canton, part of the archipelago nation of Kiribati -- currently has a single usable runway, officially measuring 6,230 feet in length, although the total unimproved length is closer to 8,000 feet, based on satellite imagery, reported Asia Times.

The ribbon-shaped island, which has a total area of only around 15 square miles and a population of approximately 20, is part of Kiribati's wider Phoenix Islands group, none of the others of which are inhabited.

During World War II, the coral atoll's airstrip was used by the US Army Air Forces as part of an air ferry route between Hawaii and the South Pacific.

After the war, civil operators also used it as a trans-Pacific stopover. The United States also made use of the island for space and missile tracking up until the late 1960s.

The Australian Strategic Policy Institute (ASPI), a Canberra-based think tank funded in part by the Australian Department of Defense, fretted in a September 2020 article that Beijing was likely to reclaim seabed and expand island installations in Kiribati as well as fortify them, as it has done to some South China Sea islands.

It accused China of "moving to achieve control over the vital trans-Pacific sea lines of communication under the guise of assisting with economic development and climate-change adaptation."

The island would in fact become "a fixed aircraft carrier," according to one military analyst.

And should it become a military facility, the airstrip would most likely be used as a base for the plethora of unmanned reconnaissance drones used by the People's Liberation Army (PLA), reported Asia Times.

It could also hold an overt military component, including other anti-access and area denial capabilities, such as surface-to-air missiles or shore-based anti-ship cruise missiles.

The existing runway, once modernized, could be long enough to support fighter deployments, but the improved section would likely need to be extended out to the full 8,000 feet length to support maritime patrol aircraft or even bombers.

A considerable investment would also need to be made to supporting infrastructure to sustain any kind of meaningful, longer-term deployment, including hangars, fuelling and maintenance facilities and accommodations for aircrew and ground personnel, said Makichuk.

As well as providing a foothold in a strategic location, China's plans for Kiribati could also impact its access to that nation's extensive exclusive economic zone, which covers more than 1.35 million square miles and includes some of the most productive fishing grounds in the Pacific. (ANI)