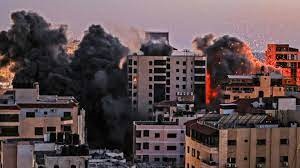 Cross-border fighting between Israel and militant groups in Gaza intensified on Tuesday, with Israel carrying out deadly airstrikes in the Palestinian territory and Hamas firing heavy barrages of rockets at Israeli cities including Tel Aviv.

At least 26 Palestinians, including nine children, were killed in at least 130 Israeli strikes on Monday and Tuesday, and 122 others were wounded, according to health officials in Gaza. Two people in Israel were killed in strikes on the Israeli seaside city of Ashkelon on Tuesday, and at least 56 Israelis have received hospital treatment, according to medical officials.

As multiple salvos of rockets streaked out of Gaza in rapid succession, one hit a school in Ashkelon, just 13 miles up the coast from Gaza.

The school was empty at the time because the Israeli authorities had ordered all schools within a 25-mile radius of Gaza closed in anticipation of rockets.

Several more slammed into the port city of Ashdod, a little farther up the coast, where at least one hit a house. The emergency services reported several people wounded lightly.

Shortly after 9 p.m., militants fired another barrage toward Tel Aviv, Israel’s second-largest city, one rocket hitting an empty bus south of the city, wounding at least three people, including a five-year-old girl.

The Iron Dome, an Israeli antimissile defense system, successfully intercepted about 90 percent of rockets headed for populated areas, according to military officials.

Palestinian militants said the barrage was revenge for an airstrike that hit a tower that houses the offices of several Hamas officials, as well as residential apartments, including one owned by a Hamas leader.

By early Tuesday morning, barely 12 hours after Hamas, the Islamist militant group that holds sway in Gaza, had launched a surprise volley of rockets toward Jerusalem, Israel had carried out at least 130 retaliatory airstrikes in the Palestinian coastal territory, according to an Israeli military spokesman, Lt. Col. Jonathan Conricus. Militant groups had fired nearly 500 rockets into Israel by the afternoon, according to military officials.

Carrying the body of an 11-year-old, Hussain Hamad, during his funeral in Beit Hanoun, Gaza, on Tuesday. He was killed in an explosion during the conflict.

Carrying the body of an 11-year-old, Hussain Hamad, during his funeral in Beit Hanoun, Gaza, on Tuesday. He was killed in an explosion during the conflict.Credit...Khalil Hamra/Associated Press

Colonel Conricus said early Tuesday that 15 militants had been killed in strikes by jets and unmanned drones.

He did not confirm or reject the reports of civilian deaths, adding, “We are doing everything possible to avoid collateral damage.”

Hamas said that a number of its militants had been killed and that some others had been reported missing in an Israeli attack on a target, without giving further details.

Although the intensity of the fighting seemed to have waned slightly during the night, Colonel Conricus said that the military’s air campaign was still in its “early stages.” Journalists were unable to enter the coastal enclave on Tuesday morning because of rocket fire near the crossing point from Israel.

The Israeli military said in a statement that it had reinforced its troops and was “prepared for a variety of scenarios.”

The cross-border military conflict escalated rapidly on Monday evening after weeks of rising tensions and confrontations between the police and Palestinian protesters in and around the ancient center of Jerusalem, including at the sacred Aqsa compound, known to Jews as the Temple Mount and to Muslims as the Noble Sanctuary. Hamas, casting itself as the Palestinian defender of the contested city, had issued a series of threats and ultimatums.

The immediate trigger appears to have been a police raid at the mosque compound on Monday morning to disperse crowds and stone-throwing protesters with tear gas, stun grenades and rubber-tipped bullets. More than 330 Palestinians were wounded, at least three critically, according to the Palestinian Red Crescent. At least 21 police officers were wounded.

But as the conflict expanded and the airstrikes began, it quickly became deadly.

In Beit Hanoun, northern Gaza, the Masri family was grieving for two young boys who were killed on Monday evening. Ibrahim, 11, and Marwan, 7, had been playing outside their home when a missile struck, according to their uncle, Bashir al-Masri, 25.

For Mr. Masri, the attack showed that Israel had no concern for civilian life.

“They target buildings with children, they target ambulances, they target schools,” he said by telephone. “And all the world, beginning with America, says that people in Gaza are terrorists. But we are not terrorists. We just want to live in peace.”