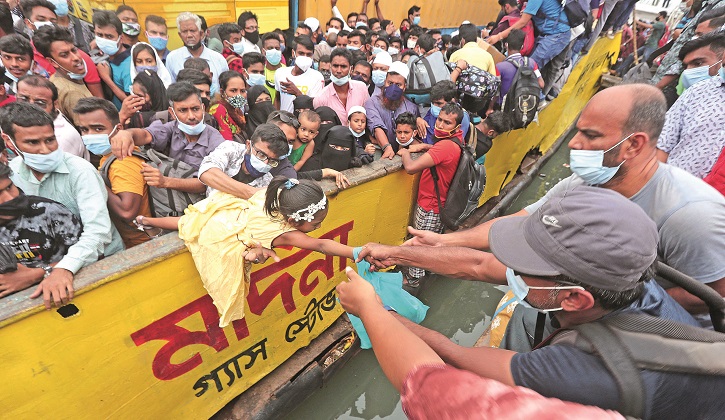 This little girl somehow makes it to the ferry which leaves the ghat before her mother boards it. Later, other passengers manage to return her to the ghat. The photo was taken from Shimulia Ghat in Munshiganj district on Tuesday. Sun Photo

Defying the government restriction amid the coronavirus pandemic, a large number of homebound people are scrambling for vehicles on roads and highways to reach their destinations.

The government had suspended inter-district public transport and asked all to stay at their present locations to check further spread of the pandemic, but the move did little to stop the desperate home-goers from embarking on the difficult journey.

Home-goers, including women and children, are leaving the capital in various small vehicles like private cars, microbuses, CNG-run auto-rickshaws and motorbikes.

Many others are also returning to their homes sitting on rooftops of numerous goods-laden trucks.

As the government halted launch and speedboat services as part of an effort to limit the coronavirus pandemic, leaving ferries the only mode of transportation for many Eid returnees.

“The pressure has increased in recent days. The bar on ferry services has been lifted. Of the 16 ferries we have here, 15 are now in operation,” said AGM Md Shafiqul Islam of BIWTC Shimulia pier.

People are continuing to crowd the ferry terminal at Shimulia and are trying desperately to board the vessels, putting their lives at risk to go home. There were massive crowds at the terminal over the last few days and the rush only increased on Tuesday.

The shutdown of public transport has not prevented people from spending extra money to find alternate means to make it to the port.

The checkpoints set up by the law enforcers and paramilitary forces have been unsuccessful in limiting.

Police said vehicles could not cross on the ferries until 3:00am on Tuesday due to the size of the crowds.

The influx of people cannot be stopped.

Meanwhile, thousands of homebound people, mostly garment workers, were seen waiting at Aminbazar and Savar on the outskirts of the capital and Gazipur’s Chandra area for vehicles to reach their destinations in the country’s southern and northern regions.

As offices and garment factories will be closed for the Eid from Wednesday, a large number of people are leaving Dhaka and adjacent areas to celebrate Eid-ul-Fitr with their families in villages.

While visiting Dhaka-Tangail highway, it was seen that people with heavy luggage were coming to Chandra from different parts of Dhaka, Savar and other nearby areas via whatever vehicles they could avail, especially motorcycles and auto-rickshaws.

From Chandra, they are taking goods-carrying trucks, pick-up vans and motorcycles. Many of them were seen renting private cars in groups.

Many people rent private cars in groups for reaching their destinations in northern districts.

Pick-up van drivers are charging Tk 500 per person for travelling from Chandra to Sirajganj district.

Whenever a vehicle stops at Chandra, hundreds of people are running towards it to reserve seats. And taking the advantage, the drivers are charging them extra.