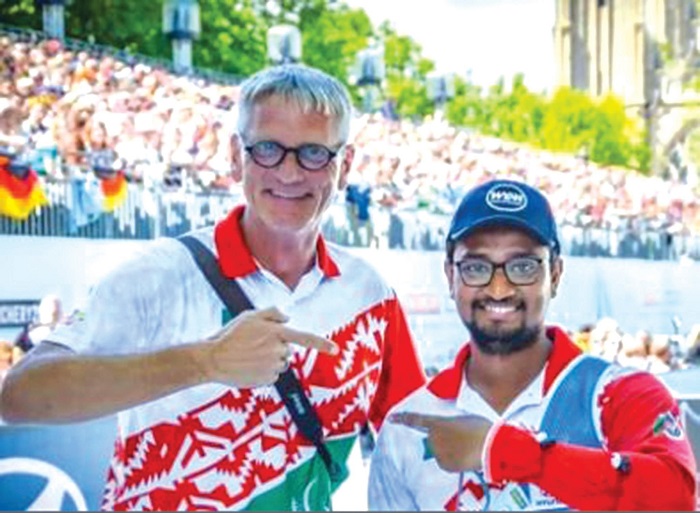 Bangladesh national team coach Martin Frederick said on Tuesday that he still keeps faith in Ruman Shana because he showed his worth there scoring the highest 679 in the 3-day ranking tournament held at the archery camp in Tongi last month.

Bangladeshi archers are going to take part in Archery World Championship stage two after a 17-month break, scheduled to be held on May 17-23 at Lausanne in Switzerland.

Bangladesh squad were finalised through a 3-day ranking tournament last month, The Daily Sun leaked the news on April 20.

“The 3-day trial (ranking tournament) was very tough and Ruman scored 679 where the national record is 686. We all know the result in the Games and national championship; he was struggling with some injuries at that time. But we believe he has already back on track, you can see the numbers in the trial,” Bangladesh coach said.

“Ruman was number one there with these numbers. Still, he is the best archer of the country that he has proved in the trail and I’m sure about it,” Martin said in a press conference on Tuesday.

Bangladesh team will leave Dhaka on May 16 to take part in stage two as a part of their preparation for stage three, scheduled to be held in Paris in France on June 21-27. Stage three will provide wild-cards for the Tokyo Olympics. Archery federation General secretary Kazi Rajib Uddin Ahmed Chapal, who was also present there, said that they are eyeing to secure another wild-card for women’s recurve.

“Our women’s recurve are raising, they are doing well gradually. So we can expect an Olympic quota for them. But before participating in stage three, we need some preparations. So that we will compete in stage two. We will not show the dream of gold to you, but we will say we will do the best there,” said Chapal.

A total of 236 participants from 35 countries -- 128 men and 108 women --  will compete there. The participating teams will stay under the strict protocols and do COVID-19 tests three times during their participation in the meet. Archery Federation President Lt Gen (retd) Moinul Islam and City Group Senior Deputy Brand Manager Rubaiyat Ahmed were also present at the press conference.