Fear, defiance in Israeli city under rain of Gaza rockets 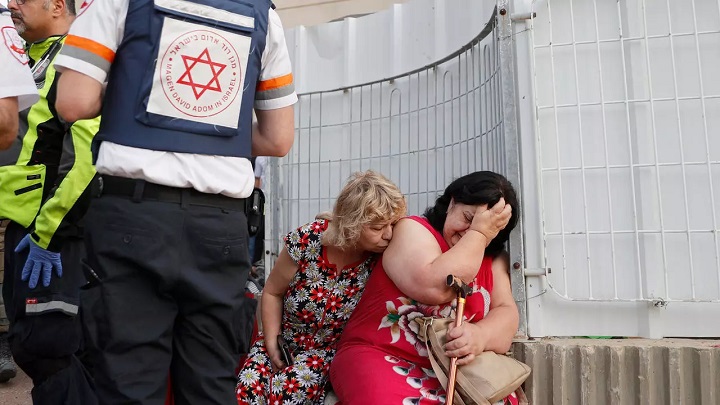 Residents of the Israeli city of Ashkelon have been running to shelters as air raid sirens wail, after Islamist group Hamas vowed to turn the community into "a hell" and as rockets killed two women there.

"At around 5 am (0200 GMT), we were woken by sirens. We had to hide in the wardrobe because there is no shelter in the house," said Shelly Belayev, whose building was heavily damaged, its facade blackened and an apartment devastated.

"There was a very strong explosion, I have never heard a sound like it. I quickly realised the missile fell here," she said. "I went outside, I was in shock."

Since the sirens began late Monday, barrages of rockets launched from the Hamas-controlled Palestinian enclave have rained down on the coastal city, located just north of the Gaza Strip.

The deluge continued on Tuesday, with Hamas' armed wing the Qassam Brigades saying it had fired 137 rockets on Ashkelon and nearby Ashdod within just five minutes during the afternoon.

Two women, one aged in her 40s, the other in her mid-60s, were killed in Ashkelon, the Magen David Adom emergency service told AFP on Tuesday, while the city's Barzilai Medical Center said it was treating 70 people.

On Tuesday morning, residents of the city, home to around 150,000 people, ventured out to survey the damage, pushing strollers near wrecked cars. In one residential area, the roof of a building was completely destroyed.

"I have to walk my dog but I'm afraid and I am always looking around me to see where the shelters are and where to run if there's a siren," said Anna, who declined to give her surname.

She said she hadn't slept the night before.

"We were afraid there would be new alerts," the 66-year-old said.

Exchanges of fire between the Israeli army and armed groups in the Palestinian enclave are relatively frequent, and Israeli residents of areas neighbouring the Gaza Strip are no strangers to air raid alarms.

But the current escalation, which began Monday against the backdrop of violence in Israeli-occupied east Jerusalem, is the worst since at least 2019.

Gaza authorities have reported at least 26 dead including nine children in Israeli strikes.

Schools were closed Tuesday in Ashkelon and other areas within a 40 kilometre perimeter around Gaza.

"It's happened before but you never really get used to it," said 53-year-old Perla Nahum.

In 2019, missiles from the enclave killed five, the spokesperson for Ashkelon's mayor said.

"We must put an end to this situation. We can't continue like this," he said, without immediately offering solutions or criticising the Israeli government.

Michael, an Ashkelon resident who had gone out to do shopping, said he wasn't afraid.

"I remember that they (Gaza armed groups) made other threats in the past," the man in his seventies said, declining to provide his surname.

"The Israeli people are strong."