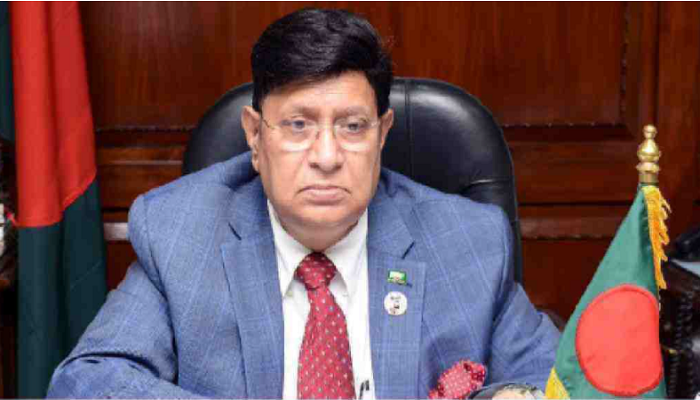 "We’re an independent and sovereign State. We decide our (own) foreign policy. But yes, any country can uphold its position," he told reporters adding that they recall with respect what others say but did not expect such behaviour from China.

The Foreign Minister made the remarks when his comments sought on Chinese Ambassador to Bangladesh Li Jiming's remarks on "Quad" and Bangladesh.

"Naturally, he (Ambassador) represents a country. They can say what they want. Maybe they don't want it (Bangladesh's joining Quad)," Dr Momen said, adding that no one from the Quad has approached Bangladesh yet.

“The comment has been an advanced one,” said the Foreign Minister.

He said usually China does not interfere in others' internal affairs and they did not see anyone saying anything in such an aggressive way. "It's very regrettable."

Dr Momen said they (China) can say their position and Bangladesh always welcomes what others say. "We'll listen to what they say. But we'll decide what is good for us."

He said once the United States had asked Bangladesh for selling gas but Prime Minister Sheikh Hasina replied to power like the US that Bangladesh would decide after keeping reserve for 50 years. "Who’re you?"

Dr Momen said they are lucky that they have a leader like Prime Minister Sheikh Hasina.

He said many people at many times had said many things in the past but Bangladesh has done what is good for the country and for the wellbeing of its people guided by its principled position.

"What he (Ambassador) said (is) fine. We’ve no special comment on that," Dr Momen added.

The envoy said obviously it will not be a good idea for Bangladesh to participate in this small club of four countries because it will substantially damage the bilateral relationship between the two countries.

“So, we don’t like to see any form of participation by Bangladesh to this small group of countries,” said Ambassador Li.

He termed “Quad” a military alliance aiming against China's resurgence and its relationship with neighbouring countries.

The US, India, Japan and Australia are part of an informal strategic alliance - the Quadrilateral Security Dialogue, or Quad as it is known.

Known as the “Quadrilateral Security Dialogue,” representatives for the four member nations met periodically since its establishment in 2007.

While talking to UNB at his residence recently, Dr Momen said then the world was divided into blocks -- one was eastern bloc and another western bloc.

The Foreign Minister said Bangladesh still believes in the foreign policy given by Bangabandhu - friendship to all malice to none.

He said Bangladesh is in a very good position as it had friends like India and China - two big countries. "We maintain good relations with both the countries."

Dr Momen said Bangladesh has had a "rock-solid" relationship with India since 1971 and China is a big economic and development partner.

"Others see us with much respect as we maintain good relations with India and China," said the Foreign Minister, adding that Bangladesh could do things that other countries could not.