Award Ceremony for the Contents on Korea-Bangladesh relation held 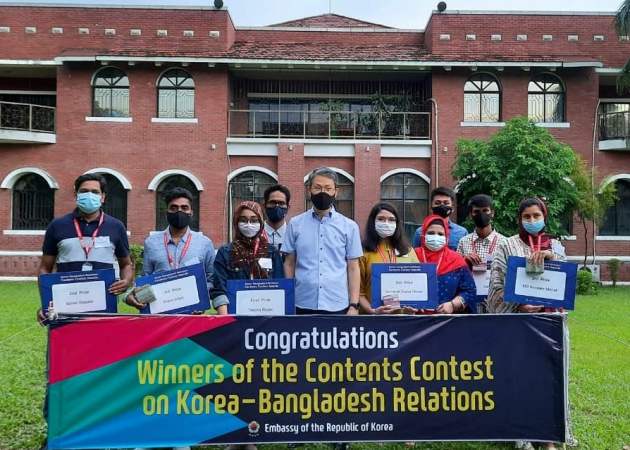 The Embassy of the Republic of Korea held an award ceremony at the Embassy for the winners of the “Contents Contest on Korea-Bangladesh Relations” on May 11.

The ceremony was held on the occasion of an important diplomatic anniversary of Korea-Bangladesh relations.

Among a number of participants in the contest, the first prize went to Tanjina Haque who presented a comprehensive survey of the Korea-Bangladesh ties for almost fifty years with many pieces of relevant photos and records.

The history of the relationship between the Republic of Korea and Bangladesh goes back to the early 1970s, particularly the 12th of May, 1972 when Korea officially recognized the independent government of Bangladesh. Thereafter, the two countries established official diplomatic relations on December 18, 1973 and Korea opened its Embassy in Dhaka on March 1, 1975. This year marks the 48th anniversary of the diplomatic relations of the two countries.

In this regard, Ambassador Lee Jang-keun shared an interesting story about the role of the former UN Secretary-General Mr. Ban Ki-moon during the initial period of the two countries’ relations at the 4th Bangabandhu Lecture Series held on March 15, 2021 at the Bangladesh Foreign Service Academy. The Embassy shares herewith a copy of the document drafted by Mr. Ban Ki-moon with regard to Korea's recognition of the newly independent Bangladesh, as well as a copy of the letter from the then Korean Foreign Minister to the Bangladesh Foreign Minister notifying the country's recognition dated May 12, 1972.